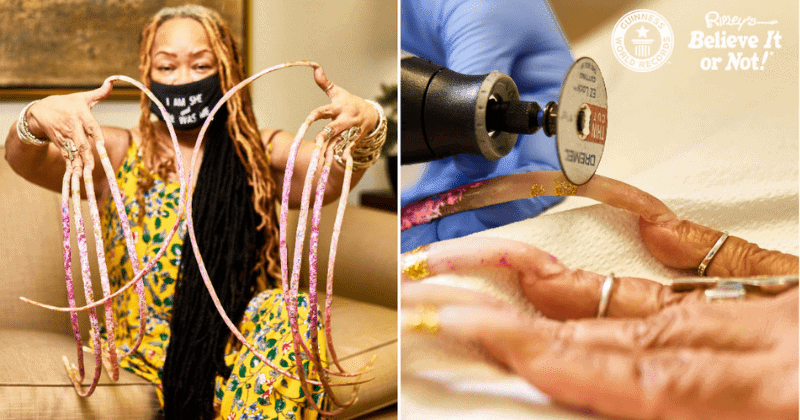 It was a bittersweet moment for Ayanna Williams as she parted ways with something that has been in her life for several years—her tremendously long nails that ran several feet and needed more than two bottles of nail polish to paint. After leaving her nails uncut for nearly 30 years, Ayanna from Houston decided to cut them off for a new life. And when she had her nails measured one last time before bidding them farewell, she realized she had broken her own Guinness World Record for the longest fingernails on a pair of hands (female), a title she bagged in the year 2017, according to bbc.

Considering herself a nail artist, Ayanna’s nails set a record in 2017 after each of them measured at least 20 inches long, and the nail on her thumb alone measured at a record of 26 inches. At the time, she became a record-holder for the longest fingernails on a pair of hands (female), and her nails put together came up to a whopping 18 ft and 10.9 inches (576.4 cm). Back then, she would have to set aside 20 hours and at least two bottles of nail polish if she wanted to get a manicure.

Right before finally cutting her nails in 2021, Ayanna broke her own record as her nails reached a new length of 24 ft 0.7 in (733.55 cm). During recent manicures, she would see 3 to 4 bottles of nail polish being emptied.

“I’ve been growing my nails for a few decades now. I’m so, so ready for a new life,” Ayanna said, as quoted by Guinness World Records. “I know I’m going to miss them, but it’s just about that time – it’s time for them to go.”

Since the time she was a child, Ayanna was obsessed with her nails and with nail art, and although her dreams of growing them to great lengths came true, she couldn’t quite break the record for the longest fingernails on a pair of hands ever (female). That title is still held by a woman named Lee Redmond, who began growing them out in 1979 and grew them to a length of 28 ft 4.5 in (8.65 m).

Nevertheless, Ayanna is still happy about breaking her own record after dedicating 28 years of her life to growing them out. Now, ordinary things like doing dishes or changing the sheets will no longer be a struggle.

While talking about how her long nails used to restrict certain daily activities, Ayanna said, “With my movements I have to be very, very careful. So usually in my mind I’m already preparing for the next step that I have to do to make sure that I don’t hurt myself with my nails – or break them. I’m excited about cutting my nails because I’m looking forward to new beginnings.”

One thing that Ayanna is looking forward to is having her record-breaking nails kept on display at Orlando’s Ripley’s Believe It or Not! Museum. And she declared: “With or without my nails, I will still be the queen. My nails don’t make me, I make my nails!”