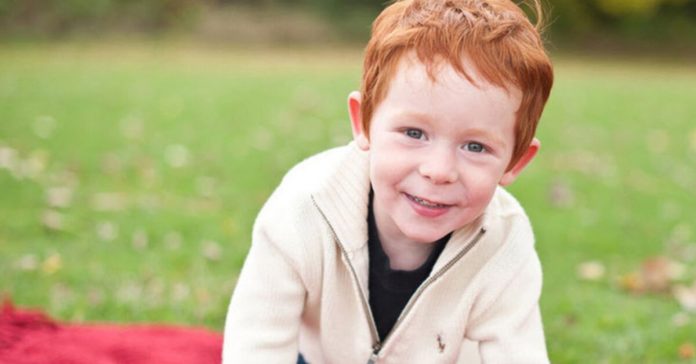 When Noah Gilbert, who is just three years old, told his mom Lauren Russell that he has “horrible” hair, she was extremely saddened.

Being a redhead, Noah had been bullied a lot for his hair. But nothing prepared Lauren for what she would hear when riding a bus with Noah.

Teenagers around them began whispering and talking among themselves.

They said extremely disproportionately cruel things about Noah, stating that ginger kids should all be taken by social services and even saying that, if they had ginger kids, they would just murder them!

Unfortunately, Noah was perfectly capable of understanding what people were saying.

He turned to his big brother, Charlie, and asked why he was born with the horrible hair while Charlie was blonde.

Charlie tried to tell him that his hair was beautiful, but Noah was shaken and confused by the teenagers’ cruelty.

Lauren was so upset and angry that she posted the story on social media, talking about what happened.

She explained how much of an effect the bullying and meanness have had on Noah, and though she remembers being bullied too as a ginger when growing up, she certainly doesn’t remember it happening when she was as young as 3.

In her heart-wrenching post, Lauren also talks about how people of all ages bully and hurt Noah, just because of the fact that his hair is ginger!

Before this, Noah never minded his hair color, fondly calling it “orange”, but since that incident he’s felt insecure and unsure about himself and his red hair.

Since then, Noah couldn’t stop asking Lauren about why his hair is bad and why people don’t like it.

He’s asked if it can be changed in color, or if he can have hair more like his brother’s.

He looks so sad and upset that Lauren can’t help her heart breaking with every new inquiry.

In her post, she also explains that the reason she’s sharing this story is because she knows the bullies are the minority and that there are more positive, kind people out there than mean ones.

She hoped that others who read the post could help her spread some love to Noah and tell him that he looks just fine and very dashing!

It wasn’t long before Lauren’s post went viral. People began sharing pictures of their own ginger kids and wrote positive, happy responses to her and Noah.

Some went as far as to compare Noah to famous red-haired people, like Prince Harry, Damien Lewis, and Ed Sheeran!

With hundreds of positive messages pouring in, Lauren read every single one that she could to Noah, telling him how gorgeous everyone thinks he is.

She hopes that this will help him forget the vindictive statements from those teenagers.

She’s even reached out to the high school that those teens go to as she hopes that she and Noah can receive a personal apology from them.

It’s never okay to bully someone, not for their hair color, and not for anything else.

Hopefully, Noah learns that not everyone will be judgemental towards him so he can learn to love his hair again!