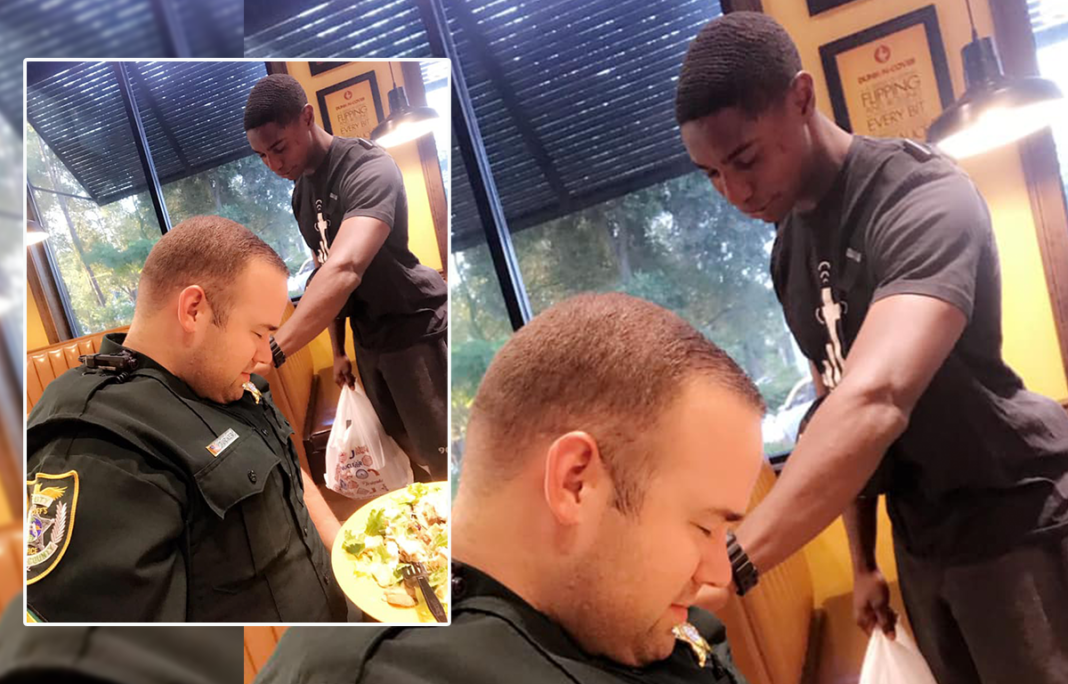 Deland, Florida A story about a young man’s prayer in a Zaxby’s restaurant has gone viral on Facebook. Although there is plenty of negative news out there, this one resonated with thousands of people and the story has even spread internationally.

Volusia County Deputy Cameron Tucker and his wife, Justine were having a meal on a Saturday night, minding their own business. The deputy was wearing his uniform and shared a friendly conversation with a young man before finding a table.

That young man, a Stetson University student, and a football player, Juan O’Neal later approached the table and did something rather unexpected. He asked if he could pray over Tucker and ask God to protect him.

Justine Tucker shared the story on Facebook and it went viral reaching over 25K shares in two weeks. Clearly, people were heartened to see this young man not only react positively to a police officer but also pray for his well-being.

“Tonight was a night that I will never forget. This picture is a reminder of God’s constant love and perfect timing,” wrote Justine.

“Tonight we had an amazing encounter with an incredible young man named Juan. He came up to Cameron and asked is he could pray over him and his protection.”

“After crying my eyes out, we got to have an amazing conversation with this gentleman. He was on FIRE for God, and you could feel His presence in the room.”

“He said that he had felt compelled to talk to us and to pray over Cameron.”

Tonight was a night that I will never forget. This picture is a reminder of God’s constant love and perfect timing….

Comments on the post were overwhelmingly positive, with many saying how it was a beautiful, hopeful moment.

“Finally, some good news. I know that anyone who is prejudice or hates others is void of GODS love. This is such a beautiful story, indeed!! We all could learn from this amazing young man and this wonderful Officer and his beautiful family. We can choose to love,” wrote one person.

“We need much more of this in today’s world,” another comment read. “God bless you, Officer! Many more people have your back than you know!!” stated another.

O’Neal and Deputy Tucker appeared together on Fox 35 Orlando, giving the officer a chance to thank the young man for his kindness. O’Neal was moved to pray for Tucker as the son of an officer from Georgia and a deeply religious Christian.

“It just gives you kind of a renewed hope that there’s a lot of good people out here who truly care,” said Tucker.

Today we see many stories about police brutality and tense race relations between police and citizens. When asked if this factored into what he did, O’Neal had this to say:

“…there’s so much tension now. Kind of just putting this aside, seeing that every person is created in God’s image no matter the skin color or what they are. It shouldn’t even be an issue.”

O’Neal’s proud grandmother shared the story to her own Facebook page and thanked everyone for the “shout-outs to her grandson’s story.” As a member of the Fellowship of Christian Athletes, he often shares his religious views and original songs on social media.

We thank Juan O’Neal for his touching and healing prayer as we all hope for a more peaceful and loving world for all.

Whenever someone asks me why I’m so full of joy and how they can get it, you’ll probably roll your eyes when I tell you that it is Jesus, but it’s the truth. In high school, from the outside, I was looking perfectly fine but on the inside I was dying everyday and suffered from depression and suicidal thoughts on the regular… sometimes I would even question if life was worth living. Yeah I went to church all my life and used to claim that I was a Christian and used to hide behind religion but I was living in sin and a complete hypocrite. It wasn’t until I realized that I am no better than anyone else, I only looked like I had it all together. See God has put eternity in every person’s heart and the things that are seen are only temporary so how do you expect to satisfy an eternal longing with something temporal, it’s impossible, believe me I tried. No amount of alcohol, drugs, sex, or partying will complete you, only the love of God will. In the moment I’m not going to lie, it feels good but when it’s over and you are alone, be honest you feel something missing. That’s because you were created for so much more than those things. It wasn’t until I got rid of all my junk and gave God my all when I received His fullness and a true relationship with Him where He completes me. It’s a free gift called salvation, not just a ticket to heaven but He wants to bring heaven down inside of you on earth. Since I have done that, I have purpose and I’m joyful everytime I wake up because I know I’m loved and valued. If you think you are too far, my God loves your kind. Seek Him while He is near,  because life is short but eternity isn’t. And I promise you won’t regret this decision. He’s literally the only way to have true restoration and a relationship with God not religion, but Jesus. He’s well and alive today, He’s been waiting to hear from you, just open up to Him as you are.