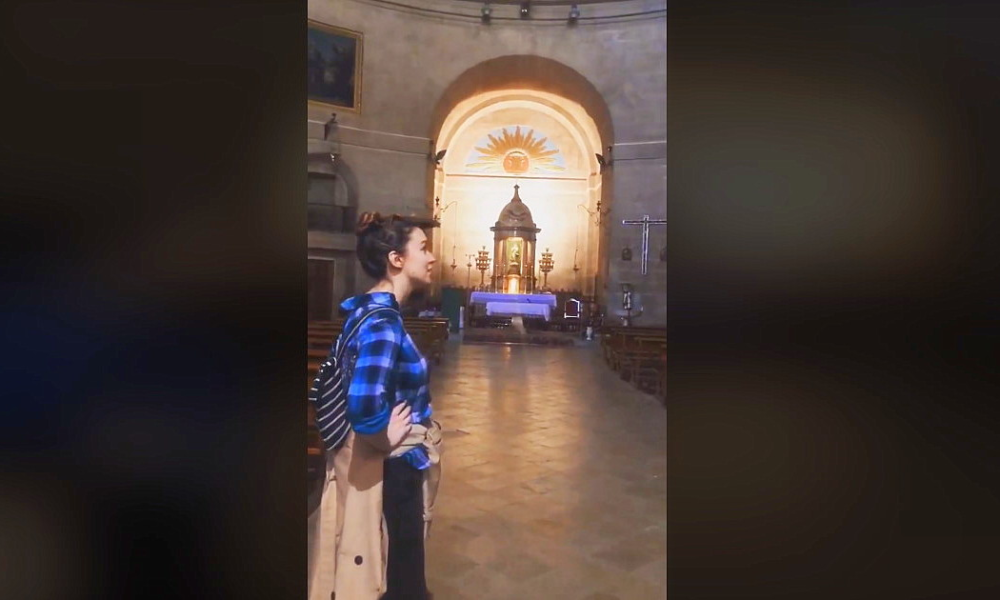 But sometimes, all one needs is an empty church to create the most heavenly results.

On a trip to Montefrío, Spain, she seized the opportunity to try out her vocals in the while there wasn’t a crowd around.

The captured footage of Malinda’s solo is so spine-tingling.

Malinda grew up around the theater and has made a career out of singing and utilizing her theatrical skills.

She’s well-known for her YouTube channel “Translator Fails,” where she inputs song lyrics into Google Translate and performs the comical outcome.

The channel alone has more than a million subscribers.

In addition to the series, Malinda also covers popular tunes and creates her own original music.

However, one video that stands out was a little more “simple” than others.

During a visit to the town, Malinda went through the doors to view it from the inside.

Apparently, it was just too amazing of an opportunity to miss.

In the video, Malinda sings a rendition of “O Come, O Come, Emmanuel.” With no other music besides her angelic voice echoing against the walls – it’s a sound that’s been leaving goosebumps.

Malinda looks around in wonder as she belts out the hymn, which is typically heard at Christmas time. She sings:

The camera person circles around Malinda allowing all angles of the church to be seen.

With the vaulted ceilings and the light streaming through the windows, the visuals alone are breathtaking.

But paired with Malinda’s version of the classic tune it’s on a whole other level of magic.

The video turned out so stunning that Malinda decided to share it on the internet.

By no surprise, Malinda’s haunting rendition spread like wildfire and currently has been viewed more than 26 million times.

And now, with the holidays peeking their heads around the corner, it’s the perfect time to listen to it again.

Many people have been deeply moved by the video, prompting them to write comments on social media.

“Such an amazing voice and gorgeous woman to share her heart through sound! The basilica made her volumes well resounded! Thank you for a smile”

“I love to think about all the voices that have bounced from those walls throughout the years. What an experience to be one of them. Beautiful.”

“If that doesn’t make you feel the Holy Spirit I don’t know what will. Just beautiful. Moved me to tears.”

Experience how beautiful it sounds when Malinda sings alone in a church, by watching the clip below.