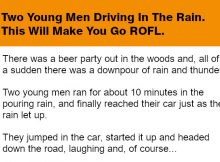 There was a beer party out in the woods and, all of a sudden there was a downpour of rain and thunder.

Two young men ran for about 10 minutes in the pouring rain, and finally reached their car just as the rain let up.

They jumped in the car, started it up and headed down the road, laughing and, of course, still drinking one beer after the other.

All of a sudden an old man’s face appeared outside the passenger window, and he tapped lightly on the window!

The man on the passenger side screamed out,

“Ahhhhhhh! Look at my window!!! There’s an old guy’s face there!”

The old man kept knocking, so the driver said,

“Well, open the window a little and ask him what he wants!”

So, the passenger rolled his window down part way and, scared out of his wits, said,

The old man softly replied, “Do you have any cigarettes?”

The passenger, terrified, looked at the driver and said, “He wants a cigarette.”

“Well, give him a cigarette! HURRY!!” the driver replies.

So he fumbles around with the pack and hands the old man a cigarette and yells to the driver,

Now going about 80 miles an hour, they calm down, and they start laughing again, and the passenger says,

“What do you think of that?”

The driver replies, “I don’t know. How could that be? I am going pretty fast.”

Then all of a sudden AGAIN there is a knock, and there is the old man again.

“Aaaaaaaaaaaaah, there he is again!” the passenger yells.

“Well, see what he wants now!” yells back the driver.

He rolls down the window little ways and shakily says, “Yes?”

“Do you have a light?” the old man quietly asks.

They are now going about 100 miles an hour and still guzzling beer, trying to forget what they had just seen and heard, when all of a sudden again there is more knocking!

The passenger rolls down the window and screams in stark fear,

“You want some help getting out of the mud? 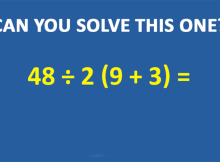 Can you solve this Math Puzzle? Recommended 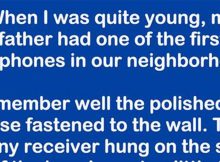 Little Boy Called The Phone Operator For Everything Recommended 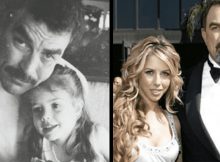 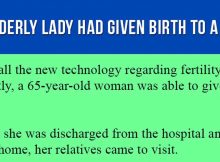 An Elderly Lady Had Given Birth To A Baby. Recommended 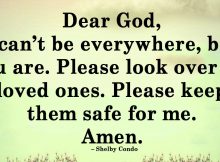 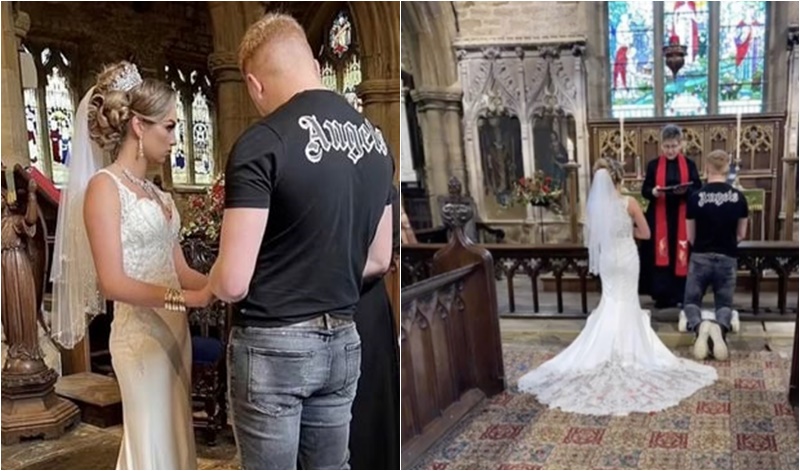 Groom slammed for attending own wedding to bride, 16, in jeans and T-shirt Recommended