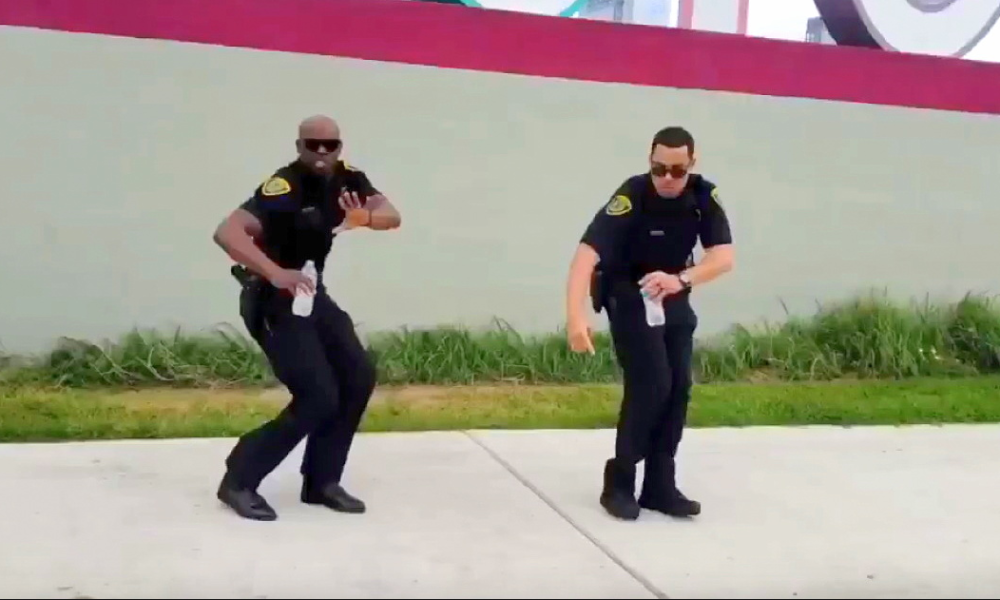 Well slap me in cuffs and call me arrested, there’s another rootin’ tootin’ clip of police officers showing off their swagger in another hot edition of the “Git Up” challenge!

You have to wonder if Blanco Brown ever guessed that his country-song hit would spawn a slew of videos of officers strutting their stuff for the world.

And where better to have spawned from than Houston Texas?

It seems there are a few simple components to creating a Git Up challenge video:

Check. Put a tick next to that one.

2: Represent your city with pride.

3: Get the most attractive dancing Police Officers available to raise the blood pressure of ladies all over country

That’s three for three in this video!

These swagged up officers have people in the comments section asking for citizen’s arrest!

…pleeez come and git me!!! Lol

Another comment, while less enamoured, loves the fun and friendly nature of the video.

If the purpose of this is to promote community engagement and connect with the people of a city, I’d say these two officers have done the job!

“They dance like two uncles at a cookout. Love this

While being compared to a couple of “uncles” may not sound like heartthrob-talk, it’s clear that these fun-loving cops are loveable in many ways.

Although some certainly are focused on looks!

“These are 2 handsome cops right here!

It’s clear that these two have practiced a lot before shooting this video, although they don’t seem afraid to put their own personality into the routine.

Officer Williams on the left seems to have his moves down!

He dances with precision and style, clearly he has spent a lot of time on dance floors!

On the right we have Officer Lahar, who brings a laid-back swagger to the routine.

It seems this officer’s style is more in looking cool than sticking the landing. Either way, he pulls of the “cool” for sure.

The difference in these officer’s styles can mostly be seen when the pair break into a freestyle at around the halfway mark.

When Blanco Brown yells “Do whatever you like now, just have fun!”, the boys oblige!

Officer Williams breaks out the finger guns for his big move.

OK, that is a little like an uncle at a BBQ! Good thing for this particular cop, he’s got so much style he makes it work.

Of course both he and his partner in (fighting) crime never let go of their water bottles the whole time.

Is this just for the “Goin’ throw down, take a sip with it” line of the song, or are these two simply promoting hydration? Or both?

Of course it wouldn’t be a Git Up challenge without a stream of comments from people begging to be apprehended by the officers in question.

Watch below to check out these two smooth-steppin’ like a couple o’ country boys!