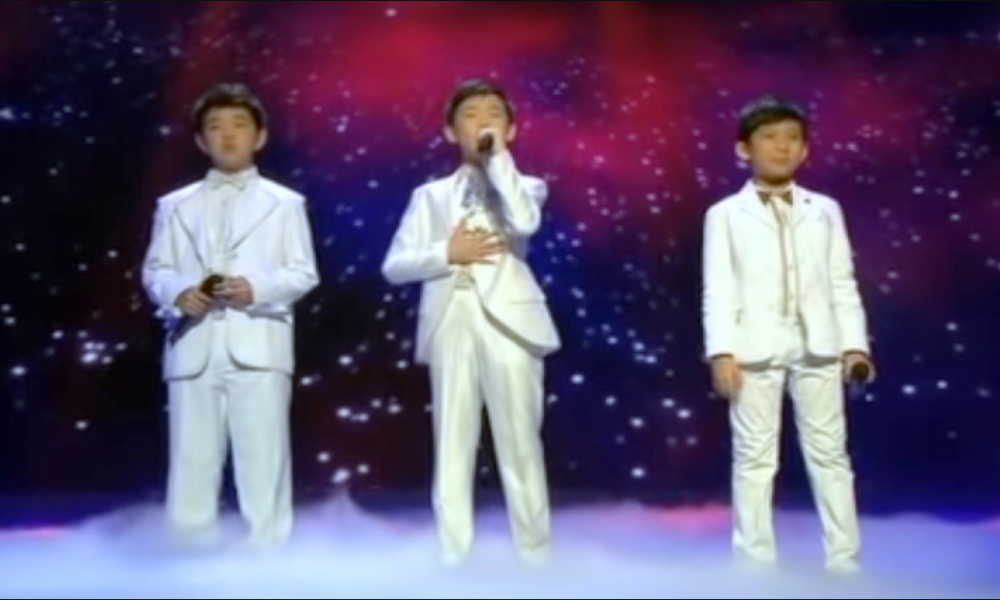 Some kids have voices so heavenly they can leave you in chills, especially when combined with the perfect song.

One young crowd likely experienced this feeling after a trio of boys sang “You Raise Me Up” at the Internal Children’s Music Festival.

Their performance not only stole everyone’s breath that evening – but the internet has fallen in love with it too.

If you’re in need of having your spirits lifted it might be what does the trick.

We all have our own favorite songs. Yet, there are certain ones that seem capable of grabbing all listeners’ hearts every time they’re played.

Many people feel that way about “You Raise Me Up.”

The video below was captured during the festival in China.

As a special gift to the youngsters, three boys took the stage with a rendition of the soul-stirringd hit.

Each boy wore a white tuxedo decorated in rhinestones that nicely complemented the holiday season.

To start, they faced in different directions with a beautiful light show in the background.

One by one they share their voices with the audience, each taking a part of the song.

From the beginning, it’s easy to recognize their talent and feel the power of the lyrics.

The third boy belts out:

An Irish-Norwegian musical duo named Secret Garden originally released “You Raise Me Up” in 2002.

However, the song didn’t receive as much of a response as it did when Josh Groban covered it in 2003.

The renowned artist is the one who actually popularized the tune, with his version becoming a major hit.

It’s also been recreated numerous times by musicians across the globe.

While there have been countless performances of “You Raise Me Up,” the trio of boys singing it is very moving indeed.

In fact, their rendition has been watched more than 3.5 million times on YouTube.

A short time into the song they turn and face the audience standing in a row.

When they finally join their vocals together they sound like a choir of angels.

Interestingly enough, the boy in the middle is recognizable in the K-Pop music world.

His name is Zhong Chenle, and he’s currently part of a popular boy band called NCT.

Chenle is originally from Shanghai, China, although he now lives in South Korea where he’s a singer, actor, and songwriter.

At the time of the festival, he would have been just 11-years-old. It’s enjoyable for fans to see a classic video of him!

By no surprise, many internet users have offered praise after listening to their cover of “You Raise Me Up.” It’s even caused a lot of goosebumps.
One person wrote:

“WOW!!! Amazing. I’m so happy for them. They have fantastic voices. I wish I could sing something back in Chinese to them, LOL. This inspires me!”

Another commenter is brought to tears with each viewing.

“I’m embarrassed to say that every time i hear the last parts where they’re singing in unison, i cry…”

“This is so beautiful. One of the most beautiful things I’ve ever heard. Thanks for sharing such a moving performance of this song”

Press play below to watch the Chinese boys’ stunning performance for yourself!