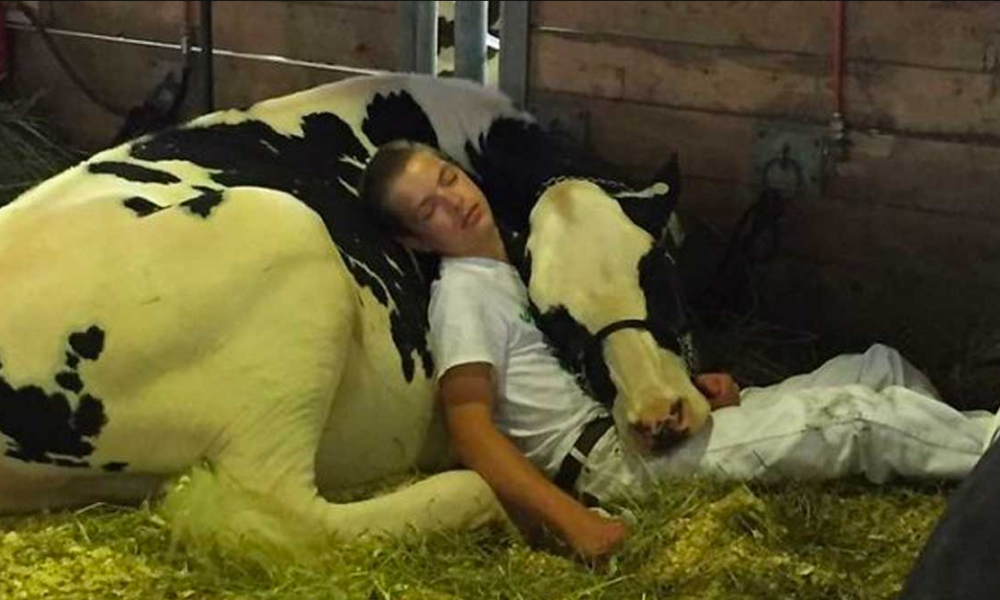 Though 15-year-old Mitchell Miner and his trusty cow Audri didn’t win the top prize in the Iowa State Fair’s youth dairy cattle show, they have surely won the world’s heart.

The two worked hard to compete in the contest and ended up coming in fifth place out of seven other contestants.

They were pretty tired since they had been up since 3 a.m. for the last three days in a row and they decided to take a nap together inside a barn after the show.

They had become quite close since they’d spent just about every day together over the last two months preparing for the competition.

Mitchell would lead, bath, clip, and walk Audri regularly leading up to the competition.

When they were taking their snooze, Mitchell’s dad, Jeremy Miner, decided to snap the most adorable photos of the two of them cuddled up during their nap.

Jeremy later posted a photo of Mitchell and Audri on Facebook and the internet completely fell in love with it.

“Our son Mitchell and his heifer after showing yesterday,” the photo’s caption read.

The photo, which is no longer available on Facebook, got more than 15,000 likes by the next afternoon.

“This is too cute,” wrote one YouTuber

“Moooooooooove over you’re hogging the hay,” joked another.

“That’s so sweet,” someone else commented

Just a boy and his cow. This photo is almost too cute for words!

Mitchell says he isn’t quite sure how he and Audri became so close.

“She likes to lay down quite a bit,” Mitchell told The Des Moines Register. ” I don’t really understand the bond with my animal either. She just enjoys my company.”

But Mitchell’s mother, Laura, thinks she has an idea why.

“I think it’s just when you spend that much time with them, they get really comfortable with you,” she said.

Though both Jeremy and Laura grew up living on farms, they are the first-generation in their families to break that tradition.

Even though they no longer live on a farm, they continue to uphold farm-life values.

“We learned a lot from the farm,” Jeremy said. “We have those values instilled in us and we are trying to do what we can to preserve that.”

Audri was borrowed for the summer and will head back to her dairy farm in Blairstown in the fall after the family’s final showing in September.