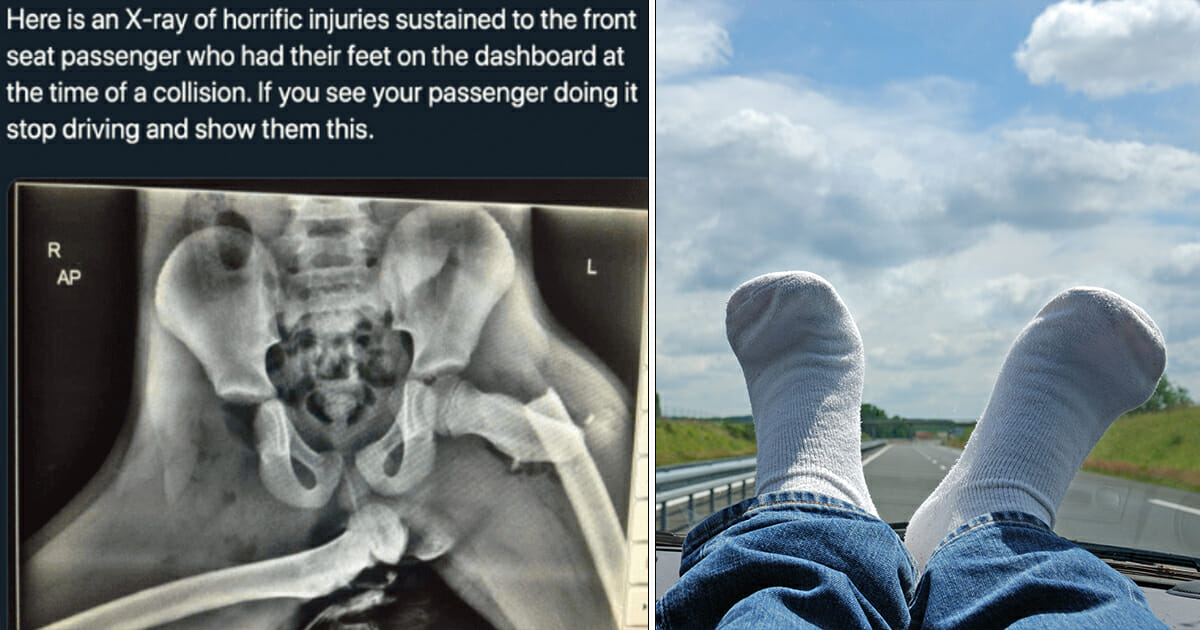 When I was young, my mother was always warning me to never put my feet on the dashboard of the car when we were going places.

It was a piece of advice I listened to, because, well, she was my mother, and I trusted her better judgement.

Still, I never fully considered the seriousness of just why it’s a terrible idea to ride with your feet on the dash. Until now, that is.

A terrifying X-ray is being circulated online, showing a young woman’s hips after a traffic collision. It’s said cops are spreading the image to warn people of putting their feet on the dashboard – it has the potential to result in serious injury.

As per the Daily Mail, the woman in question’s hips were completely crushed in the accident – one was badly broken and the other dislocated when a vehicle hit the one she was riding in.

Accompanying the pictures that were uploaded on Twitter, Sergeant Ian Price, of Dyfed–Powys Police in Wales, wrote: “Here is an X-ray of horrific injuries sustained to the front seat passenger who had their feet on the dashboard at the time of a collision. If you see your passenger doing it stop driving and show them this.”

It’s said the woman survived the accident, but her injuries were life-changing. Needless to say, the world will be a safer place if the practise is stopped, with far too many people forgetting just how dangerous it can be.

Indeed, I think it’s best if we get this warning spread far and wide as quickly as possible.

The post Police warn people not to put feet up on car dashboard after woman suffers life-changing injuries appeared first on Newsner English.