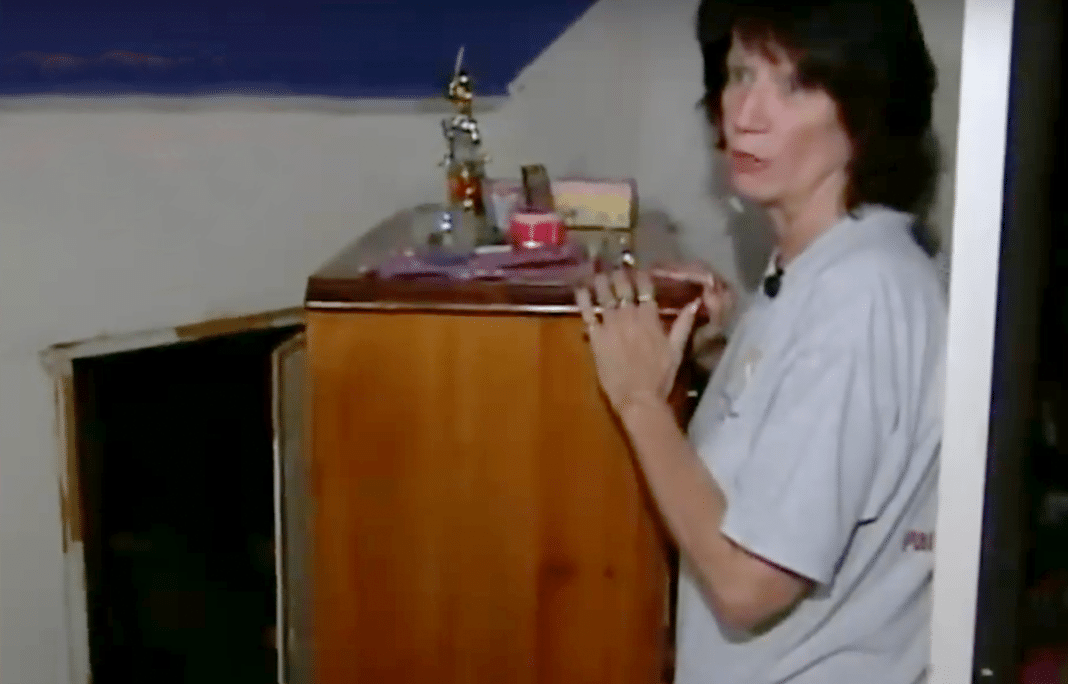 After a custody battle awarded temporary custody to an Illinois father, the mother, Shannon Wilfong, took her 4-year-old son and vanished. They were reported as missing persons, and the father, Michael Chekevdia didn’t know if he would ever see his son Richard again.

Then two years later in 2009, police got a tip and returned to the house of Wilfong’s mother, just several miles away in Royalton, Illinois. The boy had been kept in a crawl space, not allowed to see the outside world much, if at all.

Police had searched the home of Wilfong’s mother, Diane Dobbs, before, but they weren’t able to find any trace of Richard. That’s because when visitors arrived, he was told to stay in the 12 ft by 5 ft crawl space used for items like Christmas decoration and cosmetology books. The ceiling was just 4 ft high.

Some reports said he was never allowed outside the house. Court testimony revealed he may have been allowed out at night. Neighbors said they had never seen him.

“Wilfong and her mother, Diane Dobbs, blacked out the house’s windows and cut the boy off from outside world, forcing him to miss school and doctor’s appointments, starting in 2007, according to court testimony.“

Richard was found when he was 6-years old and appeared thin and pale according to his father. He stayed with his father’s relative under the supervision of state child-welfare workers until he underwent counseling.

An investigator for the State Child Welfare Agency said that Ricky emerged from hiding with underdeveloped social skills, a speech impediment, and limited reading skills. The investigator said the boy had called his father a “monster,” but Chikevda said it appeared to have been a “programmed response” that he had learned.

“We let him out of the car and he ran around like he’d never seen the outdoors,” Sergeant Stan Diggs told ABC News. “It was actually very sad.”

Wilfong and Dobbs said they had hidden the boy to protect him. They alleged that Chekevdia had molested Richard, but authorities wouldn’t believe them. Dobbs claimed Richard was only kept in the crawl space for five minutes in two years.

“When everything got the way it got and we knew we weren’t going to the help from no authorities, we were on our own and we had to do what we had to do, and that was to make sure our grandson stayed safe,” said Dobbs.

The Department of Children and Family Services in Illinois investigated if Michael Chekevdia had abused the boy, but found no evidence. Instead, the courts ruled that he should have custody.

Dianne Dobbs asserted that the investigation wasn’t thorough enough and that Michael Chikevda should have taken a lie detector test.

In the end, Wilfong was charged with felony child abduction. She pleaded guilty to five misdemeanors, including obstructing a peace officer and spent two years on probation. She paid a $1,500 fine and served one month in jail.

Dobbs was charged with aiding and abetting. Although she said she would never plead guilty in an interview, she pleaded guilty to obstructing a peace officer and was fined $1000.

Dobbs said she and her daughter pled guilty to end the trial and pursue visitation rights.

Michael Chekevdia, a former cop, retired from 30 years of military service in 2012. He served in the Illinois Army National Guard as a lieutenant colonel.

The father of the missing boy was satisfied with the plea deal states attorneys made with Shannon Wilfong and her mother Dianne Dobbs. Richard spent a while in assigned custody of the state to help him through the transition after the sad two years he spent in confinement at his grandmothers home.

Good news in this case, A Franklin County judge awarded custody of the boy who has been the center of this nationally publicized abduction case.
After he was reunited with his father, Michael Chekevdia, and appointed full legal custody of his son Ricky.

Since the mother of Ricky committed a crime by engaging in abuse and neglect of her son, the court does not see fit at this time to allow the visitation of Ricky with his mother or maternal grandmother.

After Shannon attends, all recommended court-ordered classes.
She may be allowed closely supervised visitation with Ricky until he is an adult.

See more in the video from CBS News below:

See more from AP Archive below:

The post Mom & Son Go Missing Without A Trace. 2 Yrs Later Cops Visit Gma’s House – Then They See The Wall appeared first on So Share This!.