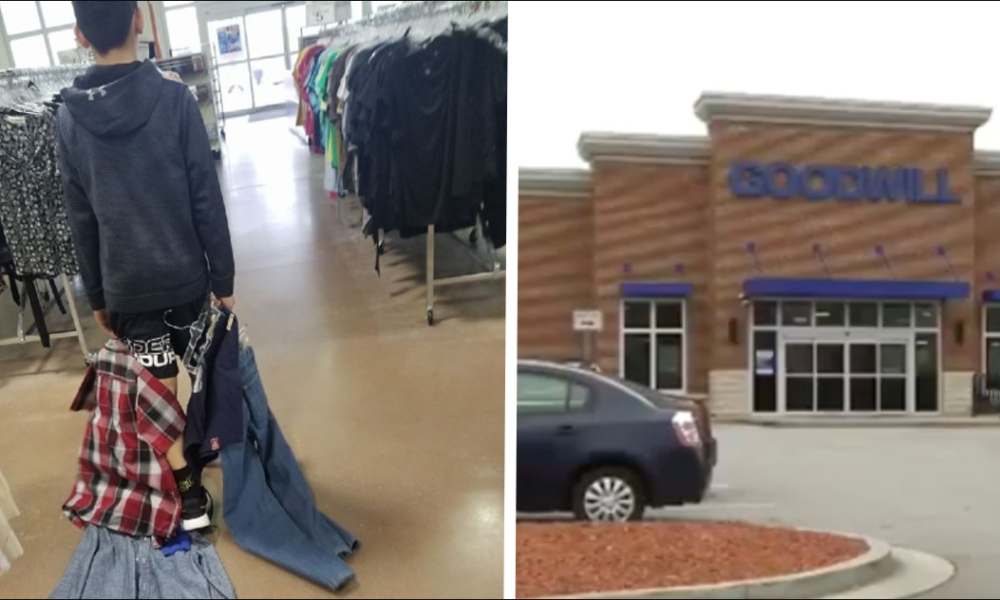 Bullying has become a huge epidemic that’s only getting worse, in most cases, kids are bullied over materialistic views or simply being different.

As a parent, you have to know if your child is a bully and to do something about it!

That’s what one mother did when she noticed her 6th-grade son, judging people for where they shop.

When this young boy was caught making fun of people for shopping at the goodwill, his mother taught him a lesson that he won’t be soon to forget!

This mom won’t stand for bullying, if her son wants to make fun of Goodwill, Goodwill is where he will shop

It all started when Cierra Forney, noticed her 13-year-old son, Anthony Forney, making some remarks that she wasn’t very happy with.

Anthony scoffed at the idea of shopping at the Walmart, Cierra just couldn’t believe what she was hearing.

Anthony had been making fun of people for shopping at the goodwill and/or other low-end clothing stores, his snide remarks took their toll and Cierra had enough!

Cierra made Anothony take 20 dollars of his own money, and buy a weeks worth of clothes from the Goodwill

For his punishment, Anthony had to go to the very store he had dissed, with 20 dollars and spend his hard-earned money on clothes for the week.

The 6th-grader wasn’t happy, he sulked through the aisles dragging the clothes behind him.

Cierra saw the moment as a life lesson, so she snapped a picture of her pouting son and uploaded it to Facebook.

The picture went viral, 778k people have liked it, 169k have commented and 294k have shared the post

Everyone can appreciate a lesson on bullying, that’s why hundreds of thousands resonated with the post! Cierra captioned the post:

“So lately, my 13-year-old son had been acting a little… entitled. Acting like he’s too good to shop at Wal-Mart or making snarky comments about kids at school who shop at the goodwill and quite a few other things. I don’t tolerate that. Today, he took his own 20.00 to the goodwill to buy clothes to wear the entire week to school. Whatever he found is what he would have to wear. He isn’t happy and shed a few tears but I firmly believe in 15 years he will look back and laugh at the day his Mom made him shop at goodwill. I want to teach my kids that money isn’t everything and if you have to degrade other people because of where they shop, then you too will shop there. Side note, I love the goodwill!!”

Her clever punishment hit home with the 6th grader, who learned some valuable lessons from the ordeal

Anthony learned a very valuable lesson, he’s more grateful for the things he has and even found some really good clothes at the Goodwill!

“Don’t be spoiled, I might just tell them to be thankful for what you have,” Anthony told Fox 5 News, about the lesson he’ll share with his friends.

Bullying has to stop, everyday someone is being bullied for something they can’t help, it’s up to us to step in and steer people away from materialistic views.

Great job Cierra, we need more parents like you around!