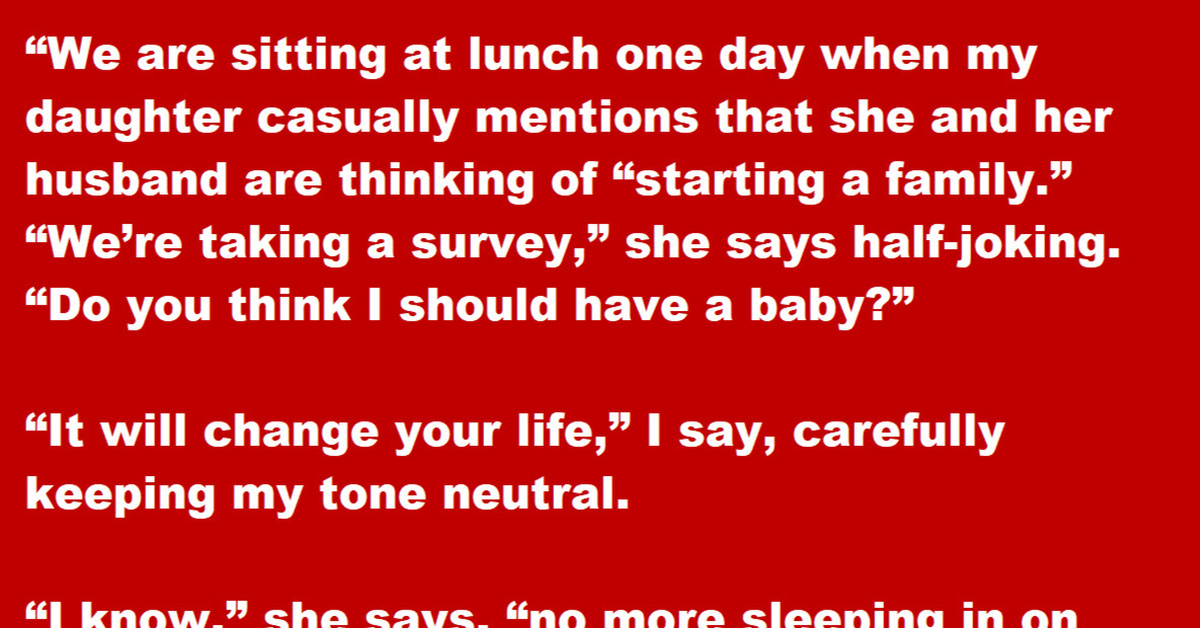 There are many things that will impact our lives in some way or another. Some of them may do so in an obvious way, such as the day that we graduate from high school or perhaps when we get our first job. Most people also realize that getting pregnant and having a baby will impact their life as well, but they typically have no clue as to the extent it will affect them. That is, of course, unless they have already had a child. One mother was thinking about how her daughter would be changed when she had a baby, and the story will move you.

“We are sitting at lunch one day when my daughter casually mentions that she and her husband are thinking of “starting a family.” “We’re taking a survey,” she says half-joking. “Do you think I should have a baby?”

“It will change your life,” I say, carefully keeping my tone neutral.

“I know,” she says, “no more sleeping in on weekends, no more spontaneous vacations.”

But that is not what I meant at all. I look at my daughter, trying to decide what to tell her. I want her to know what she will never learn in childbirth classes.

I want to tell her that the physical wounds of child bearing will heal, but becoming a mother will leave her with an emotional wound so raw that she will forever be vulnerable.

I consider warning her that she will never again read a newspaper without asking, “What if that had been MY child?” That every plane crash, every house fire will haunt her.

That when she sees pictures of starving children, she will wonder if anything could be worse than watching your child die.
I look at her carefully manicured nails and stylish suit and think that no matter how sophisticated she is, becoming a mother will reduce her to the primitive level of a bear protecting her cub. That an urgent call of “Mom!” will cause her to drop a soufflé or her best crystal without a moments hesitation.

I feel that I should warn her that no matter how many years she has invested in her career, she will be professionally derailed by motherhood. She might arrange for childcare, but one day she will be going into an important business meeting and she will think of her baby’s sweet smell. She will have to use every ounce of discipline to keep from running home, just to make sure her baby is all right.

I want my daughter to know that every day decisions will no longer be routine. That a five year old boy’s desire to go to the men’s room rather than the women’s at McDonald’s will become a major dilemma. That right there, in the midst of clattering trays and screaming children, issues of independence and gender identity will be weighed against the prospect that a child molester may be lurking in that restroom.

However decisive she may be at the office, she will second-guess herself constantly as a mother.
Looking at my attractive daughter, I want to assure her that eventually she will shed the pounds of pregnancy, but she will never feel the same about herself.

That her life, now so important, will be of less value to her once she has a child. That she would give herself up in a moment to save her offspring, but will also begin to hope for more years, not to accomplish her own dreams, but to watch her child accomplish theirs.

I want her to know that a cesarean scar or shiny stretch marks will become badges of honor.

My daughter’s relationship with her husband will change, but not in the way she thinks.

I wish she could understand how much more you can love a man who is careful to powder the baby or who never hesitates to play with his child.

I think she should know that she will fall in love with him again for reasons she would now find very unromantic.

I wish my daughter could sense the bond she will feel with women throughout history who have tried to stop war, prejudice and drunk driving.

I want to describe to my daughter the exhilaration of seeing your child learn to ride a bike.

I want to capture for her the belly laugh of a baby who is touching the soft fur of a dog or cat for the first time.

I want her to taste the joy that is so real it actually hurts.

My daughter’s quizzical look makes me realize that tears have formed in my eyes. “You’ll never regret it,” I finally say. Then I reached across the table, squeezed my daughter’s hand and offered a silent prayer for her, and for me, and for all the mere mortal women who stumble their way into this most wonderful of callings.