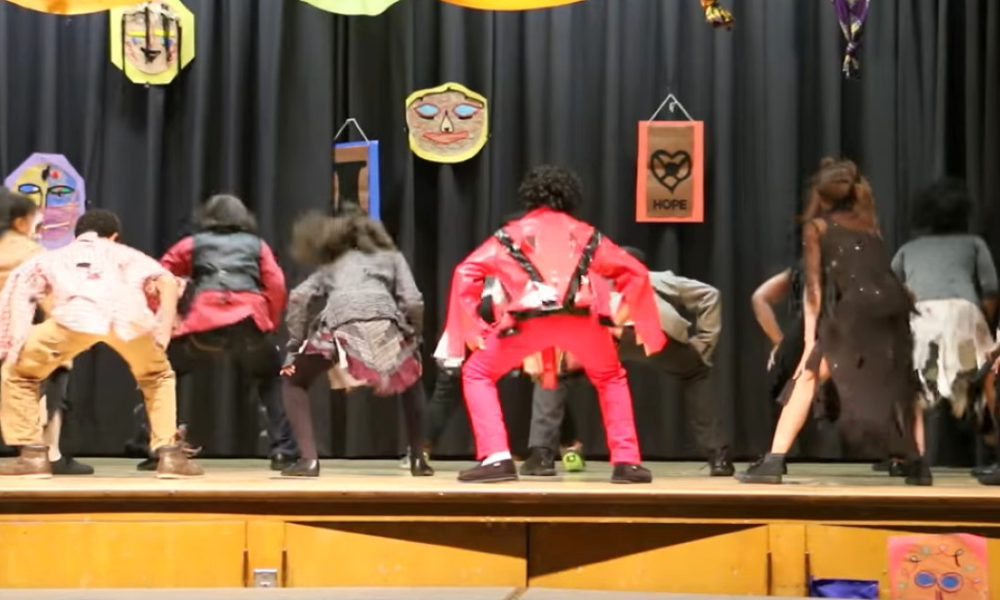 When students from Baldwin Hills Elementary performed their own version of “Thriller” on stage – let’s just say they had shivers going down everyone’s spines.

Their remake of Michael Jackson’s classic horror video has taken the internet by storm, and rightfully so.

It’s a brilliant act full of zombies, dance moves, and of course, the unforgettable red jacket.

So, it’s time to pop some popcorn and discover why these kids had the crowd going nuts.

If you were alive in the ’80s, likely you can recite at least some of the lyrics from “Thriller.”

But even more so, just the mere song title alone probably puts visions of dancing monsters in your head.

The “frightening” tune was released in 1982 on Jackson’s Thriller album, with the music video coming out the next year.

It was enough to give people nightmares, but according to The Guardian, it also sent record sales through the roof.

At Baldwin Hills Elementary school in Los Angeles, California the students are taught to appreciate influential artists and music from the past.

The fourth and fifth-graders were given a project that would pay tribute to the late King of Pop.

Through the guidance of their teacher, Malinda Williams, they learned an epic dance routine to “Thriller.”

Their performance starts with a little history of the musician and album. And who better to explain it than a mini-version of the singer dressed in his famous red outfit?

Right in the middle of the boy’s speech everything suddenly goes dark. Scary sounds and screams fill the room and that’s when the undead begin to rise.

Kids dressed as zombies flood the front of the auditorium surrounding young Jackson.

From the very beginning, the students do an incredible job of acting creepy, especially paired with their costumes.

The performers take to the stage with “Thriller” in the background. Just as they begin to dance, the student dressed as Jackson escapes behind the curtain.

If you’re familiar with the ’80s music video, you’re going to recognize some of the iconic dance moves.

Jackson, of course, returns to the stage after being transformed into a zombie too!

Get ready for an epic performance that surely would have made the artist himself proud.

To say that these kids have great talent is an understatement.

They completely rock the routine, which is the perfect tribute to the chilling video.

Here’s an interesting fact. According to Billboard, in 2009 Thriller became the very first music video to be admitted into the Library of Congress’ National Film Registry.

There have been many excellent performances to come out of Baldwin Hills.

Williams has choreographed many routines that have gone viral, including ones from their Motown review show.

She enjoys teaching students about music from history – and puts a lot of focus on Motown from the ’60s and ’70s.

They’ve covered legendary artists like The Supremes, Stevie Wonder, The Temptations, and even The Jackson Five.

But this time, however, they focused on an all-time hit from the ’80s.

One memorable part about “Thriller” is when Vincent Price gives his terrifying narration in the song.

You might just get the creeps as the fourth and fifth-graders dance with his voice in the background.

It all ends with the actor’s haunting laugh which sends them dropping to the floor.

By no surprise, the video below alone has been watched more than 3.4 million times online. It’s one you don’t want to miss!

Hit play below to watch these kids nail “Thriller” with their awesome moves.