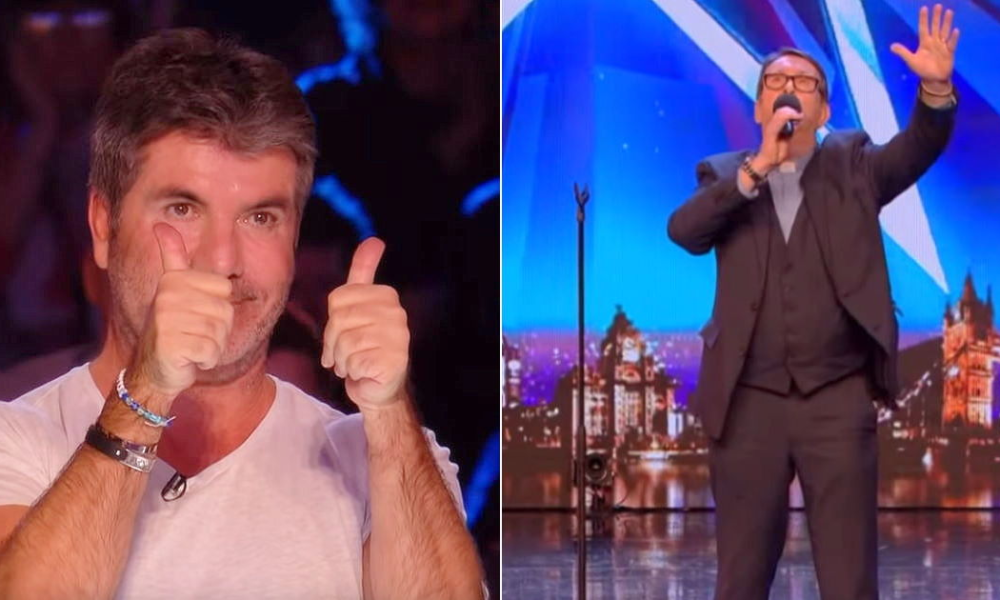 Father Ray Kelly was 64-years-old when he decided to test his singing skills on Britain’s Got Talent.

It’s not very often that an Irish Catholic Priest enters the competition (or ever) so it was guaranteed to be a unique audition regardless of the outcome.

However, instead of Father Kelly being just an interesting contestant, he proved to everyone that he has much more than just a heart of gold.

In fact, it even led to Simon giving him the greatest compliment possible.

You’ll soon realize why his soul-stirring audition set the internet on fire.

Believe it or not, Father Kelly was a viral sensation even before stepping foot onto the stage of BGT.

In 2014, the priest got his first taste of YouTube fame when a video of him singing was posted online.

It took place at a wedding where he surprised a bride and groom with a rendition of “Hallelujah.” As of 2019, it’s been viewed more than 70 million times!

Father Ray Kelly was a fan of BGT, so he mustered up the courage to try out for it.

One aspect that excited him a lot was thinking he could possibly sing for the Royal Family one day.

Initially, Simon didn’t know how the audition would go after the priest walked on stage and explained his background.

However, he kept his feelings to himself and asked about what song he’d be performing.

As it turns out, Father Kelly had selected R.E.M.’s emotional classic from the 90s, “Everybody Hurts.” He explained to the judges why he connected with it, saying:

“It’s a song that’s kind of near and dear to my heart. I suppose being a priest you get in touch with a lot of pain, a lot of joy, and happiness as well…”

All the judges were anxious to hear Father Kelly’s version of “Everybody Hurts.” The room fell silent so he could begin.

If you’re someone that gets the chills listening to moving performances, you’ll certainly need a sweater for this one.

As soon as Father Kelly unleashes his voice it’s obvious he’s “got talent.”

But that’s not all. On top of having soothing vocals, Father Kelly’s song choice is spot on too. It’s impossible to not feel the energy as he sings the powerful lyrics:

“When the day is long
And the night, the night is yours alone
When you’re sure you’ve had enough
Of this life, well hang on…”

From the crowd’s reactions and the look on Simon’s face, it’s easy to tell that people were enjoying his rendition. Father Kelly then ends it on the line, “You’re not alone.”

After he finishes the audience seems so touched that no one claps and you can hear a pin drop.

Simon then does something you don’t normally witness – he stands up and is the first to break the silence with a round of applause.

Everyone immediately takes his lead, and just the sight of the standing ovation brings tears to the priest’s eyes.

Finally, it was time to hear what the judges had to say about Father Kelly’s performance.

The first judges praise him for his audition, calling it “brilliant” and “beautiful.” Yet, as we know, sometimes it’s nice to save the best for last.

“I wasn’t quite sure what to expect, to be honest with you. But, I want to tell you something… This is one of my favorite ever auditions.”

A compliment like that isn’t something you hear on the show often – especially from Simon’s mouth. By no surprise, Father Kelly receives four “yeses” to advance.