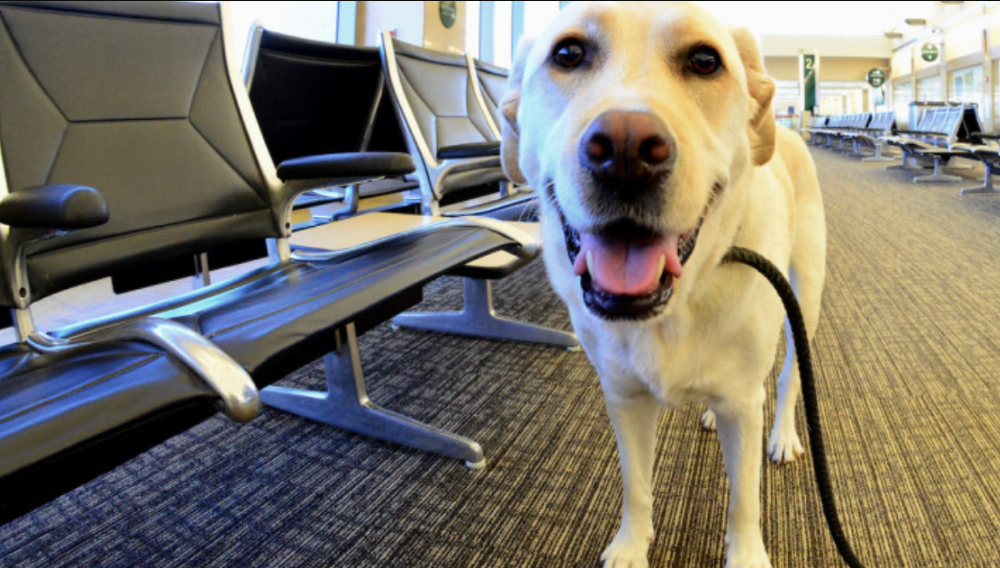 Most of us have seen service dogs with their owner or handler and we’ve always been told to never pet or touch them, right? We also generally know that you’re likely to see a service dog in places where you might not see other dogs, like a grocery store.

But what if a service dog approaches you while their owner is nowhere in sight? Well – this could mean something quite serious.

If a service dog approaches you and it’s alone – it might be trying to find help for its owner.

A Tumblr post recently went viral explaining the dangers of ignoring an unaccompanied service dog and what to do if you ever see or are approached by one. If you ever see a dog in a service vest or harness with no one at the end of their leash…please read on.

Titled the “Service Dog PSA,” the post is a story about a woman who tripped and fell while she was with her service dog. The dog had been trained to immediately find an adult if she fell or had a seizure and locked eyes on a passerby.

Sadly, the woman “was swatting him and telling him to go away,” not knowing that there was a medical emergency taking place nearby.
Take a look at the continuation of the story below.

“So today I tripped. Fell flat on my face, it was awful but ultimately harmless.

My service dog, however, is trained to go get an adult if I have a seizure, and he assumed this was a seizure (were training him to do more to care for me, but we didn’t learn I had epilepsy until a year after we got him).

I went after him after I had dusted off my jeans and my ego, and I found him trying to get the attention of a very annoyed woman.

She was swatting him away and telling him to go away. So I feel like I need to make this heads up.”

“If a service dog without a person approaches you, it means the person is down and in need of help,” the woman explained.

We’re going to update his training so if the first person doesn’t cooperate, he moves on, but seriously guys.

If what’s-his-face could understand that lassie wanted him to go to the well, you can figure out that a dog in a vest proclaiming it a service dog wants you to follow him,” the post concludes.

After the post went up, it was shared hundreds of thousands of times.

The woman who posted the story says that although the story didn’t happen to her firsthand, it was important to share.

She says she’s glad to have brought awareness to this situation and hopes that it could help save someone’s life someday.

Catching word about the viral post, the Today show wanted to investigate this issue even further and aired a section during their broadcast to help educated people.

They spoke with a professional dog trainer, explaining exactly what to do if approached by a service dog.

Do you know what to do if a service dog approaches you without a person?

A PSA for service dogs is going viral after a story was posted on Twitter. @TODAYPuppy’s trainer, Olivia, answers common questions. #OrangeRoom pic.twitter.com/lGQg8162f2

The trainer on the Today show elaborated even further about how the service dog might act if they need your assistance.

“What they’re going to do is take their nose and nudge your leg,” she explained, mentioning that service dogs are not often trained to jump or bark. “If you see a dog in vest without a person attached to it, follow it.”

If you’re still not sure about following a dog you don’t know, try asking it simple questions – they’re extremely smart and usually don’t have any “secret” commands.

“The verbal cue is not going to be a secret password,” she said. “You can say, ‘What?’ or ‘Where?’ or just start walking [to follow the dog].”

Other people online began sharing their stories of what happened when they saw an unaccompanied service dog.

my classmate's service dog came up to me alone outside and i said "where's your mom?" he ran off and i ran with him. his mom was having a seizure on the sidewalk and i was there to put my sweater under her head to protect her.

Please SHARE this vital information with your friends and family. It could save someone’s life.