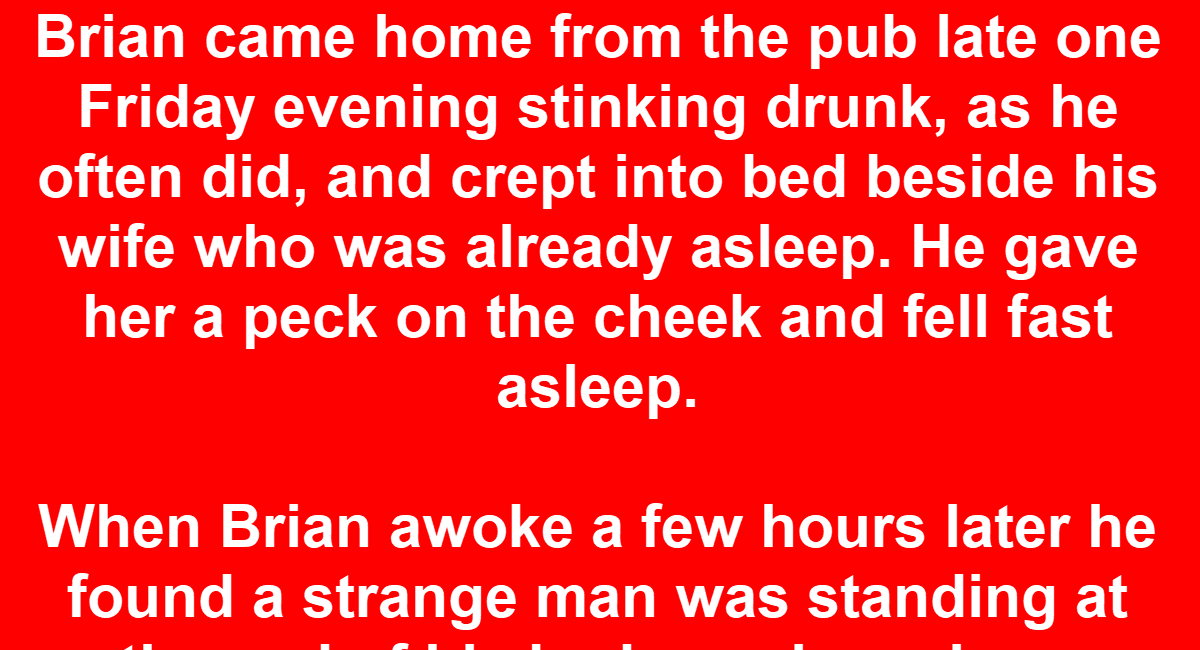 Many of us have had the experience of having a bit (or much more than a bit) too much to drink. While for some, this is considered a sort of right of passage when they are young, it tends to lose it’s amusing quality once you get married. Just ask the spouse of any husband who has ever come home drunk late at night. There’s something very sobering about an angry wife’s reaction that makes husbands wish they hadn’t touched that first drink. The husband in this joke thought he made a clean getaway as he discovered his wife sleeping when he came home drunk one night, only to realize that his getaway was anything but “clean.”

Brian came home from the pub late one Friday evening stinking drunk, as he often did, and crept into bed beside his wife who was already asleep. He gave her a peck on the cheek and fell fast asleep.

When Brian awoke a few hours later he found a strange man was standing at the end of his bed wearing a long flowing white robe. “Who the hell are you?” demanded Brian, “and what are you doing in my bedroom?”

The mysterious Man answered, “This isn’t your bedroom, and I’m St Peter”.

Brian was stunned “You mean I’m dead!!! That can’t be, I have so much to live for, I haven’t said goodbye to my family…. you’ve got to send me back straight away.”

St. Peter replied, “Yes you can be reincarnated, but there is a catch. We can only send you back as a dog or a hen.” Brian began to consider his options.

He was devastated, but knowing there was a farm not far from his house, he asked to be sent back as a hen.

“This ain’t so bad,” he thought, until he felt this strange feeling welling up inside him.

The farmyard rooster strolled over and said, “so you’re the new hen, how are you enjoying your first day here?”

“It’s not so bad,” replied Brian, “but I have this strange feeling inside like I’m about to explode”.

So Brian focused on his breathe and relaxed, and after a few uncomfortable seconds an egg popped out from under his tail. An immense feeling of relief swept over him. His emotions even got the better of him as he experienced motherhood for the first time.

When he laid his second egg, the feeling of happiness was overwhelming and he knew that being reincarnated as a hen was the best thing that ever happened to him… ever!!!

The joy kept coming, and as he was just about to lay his third egg he felt an enormous smack on the back of his head and heard his wife shouting,

“Brian! Wake up you drunken bastard, you’re sh**ting the bed!”

Please be sure to share this joke with your friends and family.