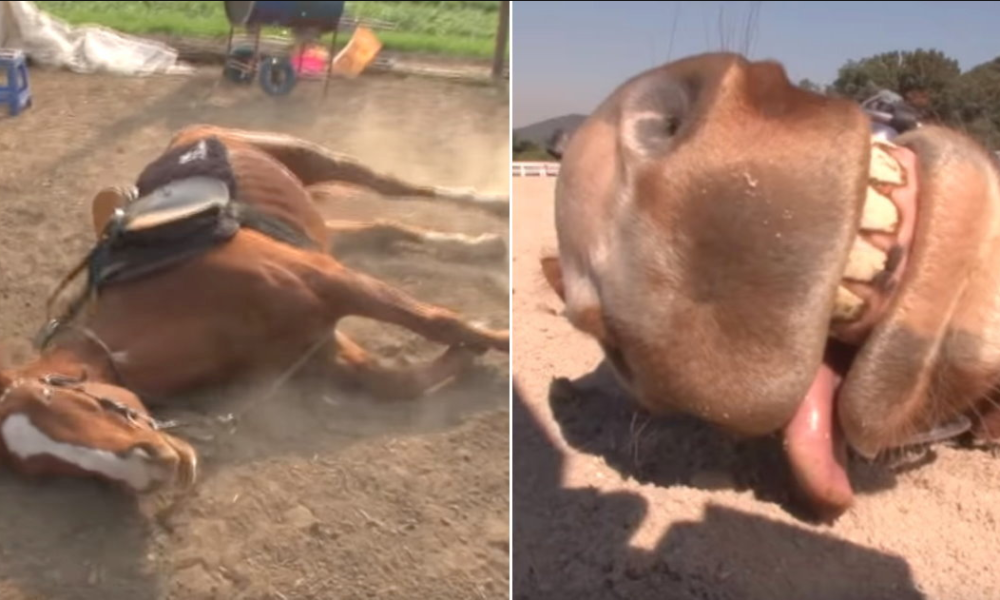 We all have our limits of what we will and won’t do – and when it comes to Jingang the horse, don’t even think about getting on his back!

Sure, there are many stubborn horses out there. But Jingang takes it to a whole other level of hilarity the moment someone attempts to ride him.

That’s because he’ll actually drop to the ground and “play dead.”

If you’re in need of a good chuckle, the video below is spreading huge horse-grins across the internet. After all, how many horses have you seen “play possum?”

Ranchers and their horses are supposed to go together like peanut butter and jelly.

There’s usually a lot of work involved in getting their animals trained, but usually, they’re able to get them on track for taking command.

Well, that is unless you’re the owner of a horse like Jingang.

He’s so adamant he doesn’t want to be ridden that he’s come up with a brilliant plan to avoid it every time.

Just like a fainting goat, he’ll fall to the floor faster than a sack of potatoes.

It’s all in the hopes that if they think he’s kicked the bucket – they’re just gonna leave him alone, right?

In the video below, the ranchers film themselves attempting to get on Jingang so they can put him to work.

Yet, each time they do – the most comical scene is captured.

A horse not following commands right away sounds pretty normal, but they can’t even get Jingang into a training position for lessons.

Over and over he’ll go into “playing dead” mode, and frankly, he’s kinda mastered the skill too.

Step one. As soon as the rancher gets near or mounts Jingang, he’ll drop to the dirt like the life’s been sucked out of him.

Step two. Jingang will pull other tricks from his sleeve such as rolling his eyes back, sticking out his tongue, and holding his legs in awkward positions.

Can we please present this horse an Academy Award or something? Move over Mr. Ed, Jingang’s really quite an amazing actor!

From the outside, it’s pretty darn funny and adorable to watch. Jingang resembles a toddler that’s invented a genius method for getting out of his chores.

He’s probably thinking, “I don’t want to do it, and they can’t make me!”

However, for the ranchers, it’s a little more frustrating. One of them admits to the camera, “It’s cute but naughty.”

Jingang isn’t the only animal on this planet that “plays dead” in an attempt to reach a certain goal.

According to the World Atlas website, there are a variety of reasons why creatures utilize the creative technique.

“The term of playing or appearing dead is also known as “thanatosis” and appears to serve various purposes in different species.

While most species feign death to escape the predators, some also adapt this behavior for capturing prey while others even utilize thanatosis as part of their courtship ritual to come close to their mate.”

Along with the opossum, types of frogs, snakes, fish, and sharks will pretend to go belly-up as well.

National Geographic also points out that other farm animals like cows and pigs can demonstrate a “trance-like state.”

Since the video of Jingang’s hilarious behavior’s been posted on social media it’s been watched millions of times. You can enjoy the compilation for yourself below!