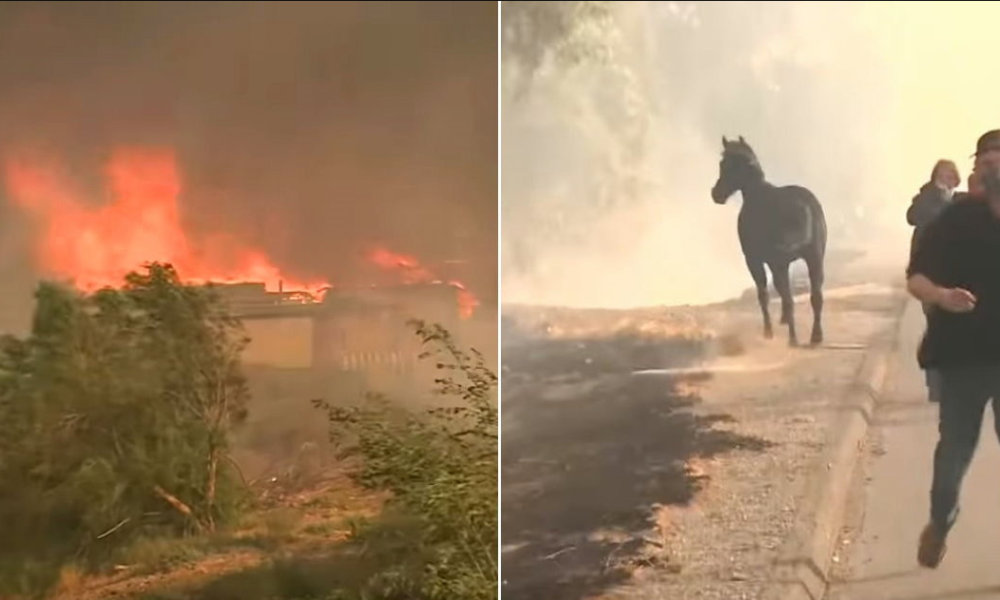 Most of us would do anything to keep our loved ones safe, even if that meant putting ourselves in harm’s way.

That strong feeling too can be seen in the animal kingdom.

One horse recently made headlines after showing her maternal instinct during a massive wildfire in California.

A video was captured of her incredible act, which shows the strong bond between family members during a frightening incident.

The state of California has been devastated by wildfires that forced thousands to flee their homes.

On the morning of Oct 30, 2019, a part of Simi Valley also went ablaze with what’s been called the Easy Fire.

According to CBSLA, within two hours the fire scorched 407 acres of the area.

By that night, over 1,600 acres had burned and 30,000 people had received mandatory evacuation orders.

Many good Samaritans jumped in to aid those affected by the Easy Fire, even rescuing animals.

But one scene that was captured on film showed another kind of hero.

It all started when a horse ranch caught fire, which sent rescuers into action to help evacuate the animals.

A grandmother horse named Prieta was also saved from the blaze.

Yet, instead of staying on the highway where she was out of harm’s way – she decided to gallop back towards the ranch. There was something drawing her there.

The video recorded shows Prieta meeting up with a couple of horses, as if she returned to lead them to safety.

According to Inside Edition, the smaller horse was her two-month-old granddaughter, Onyx.

Once Prieta reaches the foal and another horse from the ranch, she then turns around and begins galloping back towards the road.

The incredible scene has been circulating around the internet.

Among all of the devastation, it’s been warming hearts to see the strong bond between two family members – and an animal’s maternal instinct in action.

Inside Edition went on a mission to find the brave horse and her granddaughter. They successfully tracked down the ranch where they were staying at.

Not only was Prieta and baby Onyx there safe and sound, but so was Onyx’s mother, Mona Lisa. Thanks to all of the good Samaritans involved they had escaped the blaze.

While the footage has left many people dumbfounded to see such heroic behavior from a horse, one woman says it’s natural.

A horse trainer named Cynthia Shea gave an explanation to Inside Edition. She said:

“It’s just a natural instinct for a mother to want to go back for their child. Animals have the same instincts that we do.

The viral story has a lot of people leaving comments. One person shared on YouTube:

“Mares will do anything to save their offspring, even if it means ignoring their extremely strong urge to run away. Truly amazing!”

There have been many good-hearted individuals who’ve come to the rescue during the California wildfires – proving that not all heroes wear capes.

Sometimes too, they can be in unique forms not everyone expects.

You can watch the dramatic footage for yourself below!