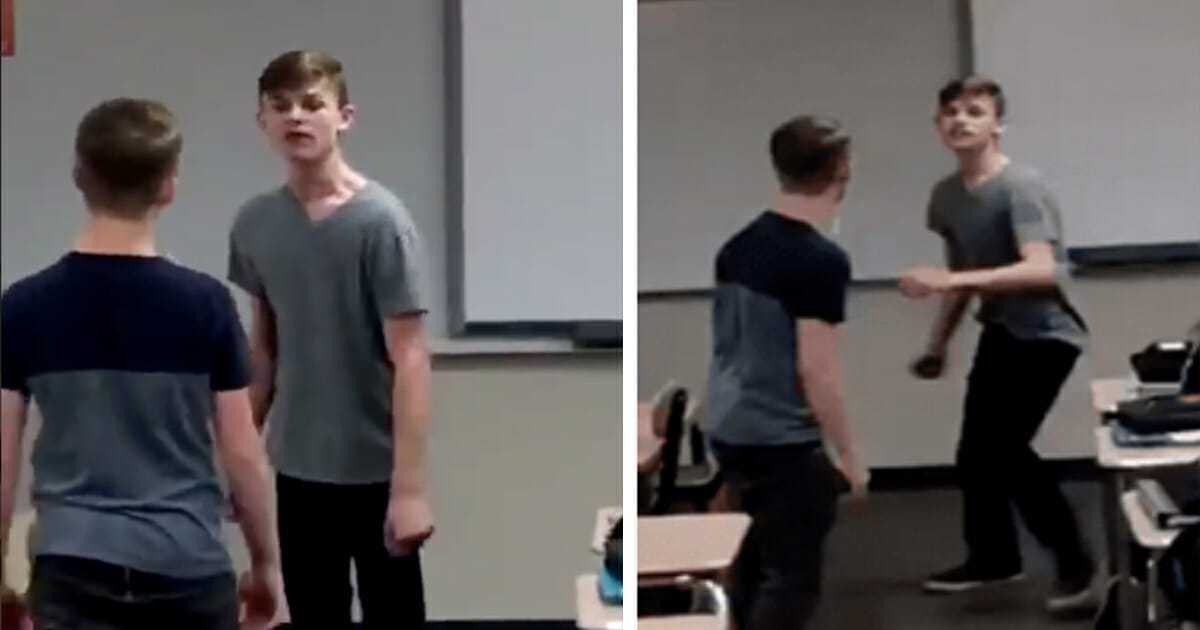 It’s a sad world where in 2020 people are still discriminated against for their sexuality, for every step we take forward in this fight there is something or someone to throw us two steps back.

Jordan Steffy came out in second grade and is happy and confident with who he is; an inspiration within the LGBTQ community with over 25,000 followers on Twitter.

But his daily struggle with high school bullies led him to respond in a way he never thought he’d have to and his message was loud and clear. Now the high school junior is being hailed a hero for his actions.

Jordan has had to suffer food being thrown at him and homophobic slurs since coming out at 7 years old. He reports the incidents to his peers at his Indiana school but told Insider it was never handled the way it should be.

“It seemed like I was getting in more trouble for reporting it than I was if I didn’t say anything at all. It was doing me more harm than it was good,” he said.

But when his classmate posted a homophobic post of Jordan on Snapchat he decided to take matters into his own hands.

“He made an anti-gay post with a picture of me on it saying how he hated gays and a bunch of throwing up emojis all over it.

“I walked up to him and said, ‘Why did you post this?’ He said ‘It was just a post.’ And I said, ‘Well, it’s not just a post. It’s a post about me, saying how you dislike who I am, and I don’t appreciate that.’ He went on to say ‘Okay, but what are you going to do about it?’” Jordan told Insider.

Jordan decided it was time to fight back and in a classroom in front of some of his classmates he fought back with Jordan hitting his classmate in the face and yelling at him.

“I just got sick of it. It’s crazy the amount of hatred I received just for liking who I like and being me,” said Steffy.

He posted a video of the incident on Twitter which has since been viewed more than 3.5 million times and has attracted thousands of messages of support.

In response to the floods of messages Jordan tweeted: “I really can’t believe people actually are around to tell me that it was ok to stick up for myself. I honestly can’t thank people enough for all the support.”

He added: “I honestly was just looking for an apology, but he acted like it was no big deal and that has been the word to define me since 2nd grade… I don’t fight really… I wanted him and others to know I was done with the constant hating comments that were made towards me constantly.”

‘Glad I stood up for myself’

Jordan and the other teen involved have been suspended, according to Jordan who also said his mom has now chosen to home school him.

Jordan wants other kids going through the same issues he faces every day to stick up for themselves.

“If I could take it back, personally, I would,” he said. “But I’m glad I stood up for myself. If you were in my shoes, you’d probably get sick of it and you’d want to stand up for yourself.”

The school has yet to comment on the incident, according to Insider.

To think kids are growing up thinking it’s okay to treat people this way and use this offensive language is both shocking and saddening.

I hope the boy responsible for the offensive post has learned his lesson and finds more understanding and compassion in his life.

Please share to show your support for Jordan and for all the young teens who are being treated this way.

The post Gay teen hailed a hero after standing up to homophobic bully appeared first on Newsner English.