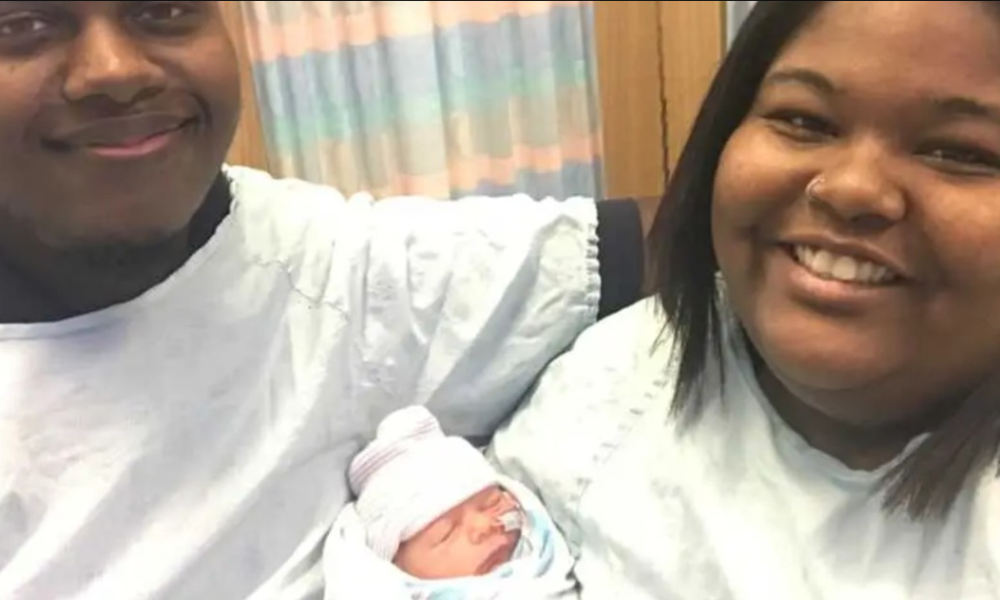 Many people dream of becoming parents someday, but life can sometimes get in the way, presenting us with obstacles and challenges that make the process of getting pregnant and welcoming a baby into the world so much more difficult, or even impossible.

Fortunately, couples that find themselves in these situations have other options.

The likes of IVF treatment and surrogates make it possible for couples that can’t conceive naturally to still have a baby, and there are also countless kids out there in the foster system, all in need of love and care.

Jarvis and Sadie had been trying to conceive for a while, but it just didn’t seem to be working out for them.

They spent 14 months trying, praying, waiting, and hoping for some good news, but every pregnancy test Sadie took came back negative.

So, after struggling to lose weight through diets and exercise, she underwent gastric bypass surgery, losing 28 lbs in a single month.

Suddenly, doctors were much more hopeful for Sadie’s chances of becoming pregnant.

I went back to my OBGYN and she was so proud of me.

She told me that if I wasn’t pregnant within six months then she would refer me to a fertility specialist, because she couldn’t prescribe me the fertility medication.

I was over the moon about that.

Sadie and Jarvis were so excited about the idea of having a baby, but even after the surgery, their attempts to get pregnant kept on failing.

Eventually, they decided that they were doomed to be aunts and uncles forever, never hearing a little voice call them “mommy” or “daddy”.

But one day, everything changed. It was late on a Wednesday night that Sadie got a text from her best friend.

It said: “I have a question. If it ever came down to it, would you guys foster/adopt a child?”

Sadie responded that of course they would, but that the cost of adoption had always seemed too high for her and Jarvis to afford.

Then her friend replied, saying that she knew a couple who were considering putting their future baby boy up for adoption and that Sadie and Jarvis could be the perfect parents for him.

Later on, the caseworker called up, asking if Sadie and Jarvis would be willing to take the child in their care for 6-12 months.

A short while later, the caseworker called again, asking if they’d be willing to adopt the baby permanently!

Jarvis and Sadie couldn’t believe their luck. They’d struggled for so long to try and get pregnant, and now they were steps away from becoming parents.

Excitedly, they prepared for the birth, hoping that the baby would be born happy and healthy and that the parents wouldn’t change their minds.

Soon, it was time to meet their little bundle of joy for the first time!

Their boy was born premature at 33 weeks. He weighed in at just 4 pounds and 5 ounces.

He was very fragile, needing a feeding tube to stay healthy, but the nurses and doctors were optimistic that he’d be fine.

His skin color didn’t match his adoptive parents, but they didn’t care at all.

Before too long, the feeding tube was removed and it was time for Sadie and Jarvis to take their boy home.

Sadie remembers worrying that the security might try to stop them as they left the building, seeing a black couple walking out with a white baby, but nobody said a thing.

Still, the couple know they might get some strange looks or comments from time to time, but they have a messsage for everyone: “Families DON’T have to match! They are built on LOVE.”

For Sadie and Jarvis, skin color has no importance in their family. The only thing that matters is their endless love for their beautiful baby boy.