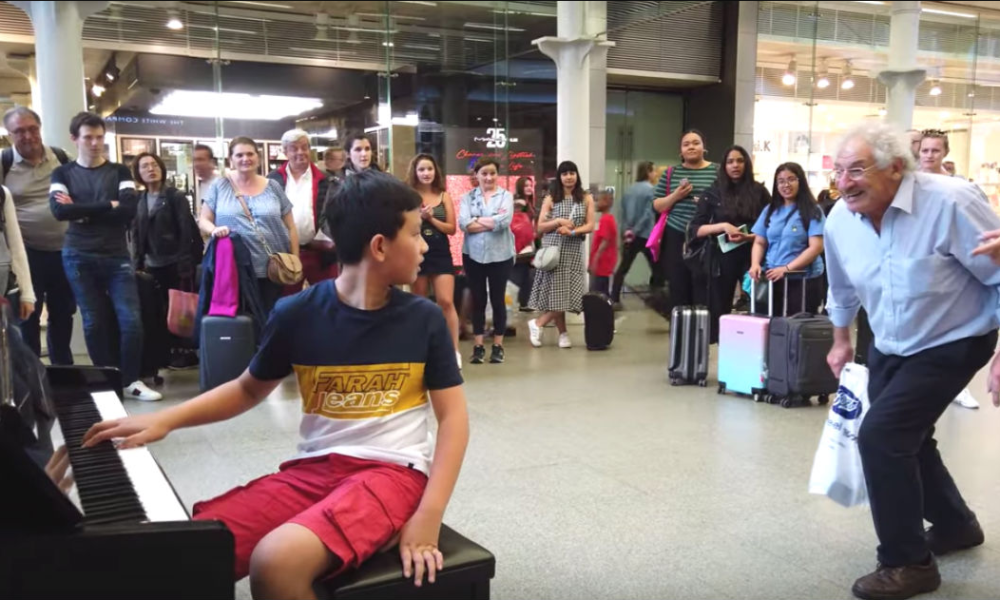 It is an anthem that is perceived as really tough to perform which is why people tend to have high expectations whenever the song is performed.

A young boy who was about to play this big Queen song on a piano in the London St.

Pancras International Station was stopped by two men even before he could begin.

They requested that he play the difficult song Bohemian Rhapsody, which he ironically was already planning to play.

The young boy only smiled shyly and proceeded to play.

What the two men and everyone in that busy place did not know was that they were about to witness something special!

The young boy who dared to play the piano in this busy London station is none other than Cole Lam, a 12-year old pianist who is known for playing piano masterpieces–and some popular contemporary songs–in the middle of crowded places such as the London St. Pancras International Station.

He does not only play the piano but other instruments, too. Among them are the clarinet and guitar.

At the tender age of 12, he already has a pretty impressive portfolio for someone who’s not even in his teens yet!

When Cole sat on that piano in the station, he was intent on playing one of Queen’s most popular and tough hits, “Bohemian Rhapsody”.

Everyone around him who stopped to watch anticipated his performance, expecting the young musician to give justice to the legendary song.

Probably out of doubt that this young musician can really play such a huge song, two men approached him just as he was about to start.

They seemed to be confirming if the boy was actually going to play such a difficult song!

But, little did they know that the child in front of them is not like an ordinary musician and he was about to prove just how good he is with the piano.

The moment Cole touched the piano keys, everything around him seemed to disappear.

It was just him and the piano and he was playing like there were no people watching.

He was feeling his performance and he was hitting every note of the song like his fingers were one and the same with the piano keys.

The way he played the keys and moved his body showed just how involved he was with his performance.

He felt the song and played from the heart. And so, everyone who got to watch this amazing boy play the music of Queen also felt the intensity of his performance.

Cole performed with real soul and his every touch on the keys brought life to the song.

He may be young but his amazing musical genius will definitely give seasoned performers a run for their money.

As he performs, Cole did not know that the two men who once stopped him from playing because of their doubt in his abilities were now watching him with awe and admiration.

He was oblivious to their reactions and only played on and on, capturing the hearts of the people who watched him in that busy London station.

Anybody who has heard the song “Bohemian Rhapsody” knows that it is a difficult song that has a lot of technical runs and melody that require a master pianist to play it.

Cole, despite his young age, demonstrated his outstanding talent and has absolutely left no doubt in his audience’s mind that he is one great musician.

Interestingly, the piano he was playing that day was a donation from Elton John, also a world-renowned pianist and singer, who is idolized and loved by millions of people in the world.

Like the famous artist, Cole is a promising musician who has tremendous potential to make it big in the music industry.

The song was about to come to an end and everyone was waiting to see how Cole would end his amazing performance.

And just as the crowd expected, Cole gave a beautiful finale to this stunning impromptu performance and everyone watching him definitely loved it!

Cole may be a young musician, but his passion for music is undeniable.

His love for music is an inspiration to the youth and his accomplishments as he reaches for his dreams are incredible for such a young age.

We can certainly picture this young man as a future world-class pianist and we are excited to see him shine brighter.