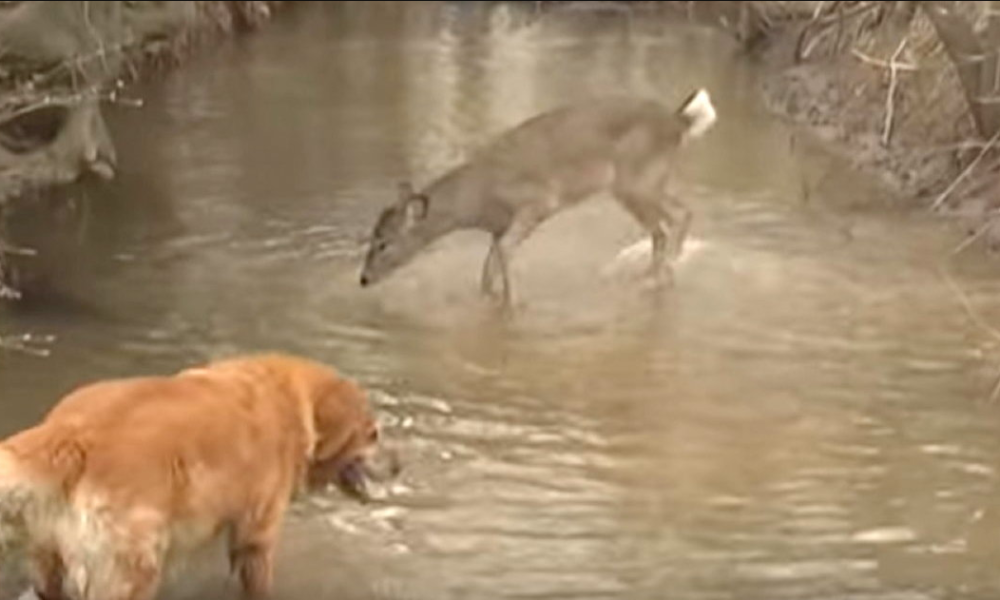 Deer are beautiful creatures that usually bolt when you come across them in the woods (and rightfully so).

However, like everything else in nature – sometimes they can surprise you too.

In the video below, a man was able to capture footage of the most heartwarming scene between a deer and his Golden Retriever.

What makes it so unique is that instead of running out of sight, all the animal wants to do is play!

If you’re in need of a spirit-booster look no further.

YouTube user, Gruper1, liked to take his dog Yukon out for walks in their local wooded area.

That’s where they met an “orphaned fawn” they began calling Daisy.

Most would think the mere sight of a human and his big dog would frighten a deer away.

But Daisy was different. Whenever she would see the pair she’d make herself present and even run with Yukon.

According to Gruper1, it was almost as if Daisy seemed to think she was a canine herself!

There was one day in particular that Daisy really wanted to play with her buddy, Yukon.

The dog was fishing for rocks in some water, which caused her to go bounding in after him.

Daisy zeros her eyes in on Yukon while he’s busy with his stone hunt. This is where it gets extra-adorable…

While you’d believe a lot of dogs might drop whatever they were doing for some playtime – eh, Yukon wasn’t really feeling it at the moment.

Daisy wasn’t about to give up so easily though. She hops around the area trying to get the Golden Retriever’s attention, all with a fun track of music added to the background.

As the man points out in his YouTube video title, it kind of looks like the deer is “dancing.” Now that’s something you don’t see every day!

By no surprise, the scene won over the internet and has been watched more than 5.5 million times online.

Gruper1 gave some details about their story in the video’s description.

“This deer thinks she’s a dog and runs with my dog when we go for a walk. This time she was feeling a little frisky.

My dog (Yukon) and (Daisy) an orphaned fawn, became friends briefly. Whenever I took Yukon for a walk, Daisy would suddenly appear.

This particular day she was in playful mood but Yukon could care less. He just wanted to collect rocks for me.”

It’s not known for certain where Daisy came from or what kind of background she had. After all, most would agree her comfortable behavior isn’t very common for a wild deer.

But there’s no denying it’s a pretty entertaining clip to watch no matter what. One person wrote:

“She is a dancing queen…he cant see or hear the beat from her tambourine! lol love it ;-)”

Other viewers were tickled by Yukon and his mission to find stones (even during a major distraction).

“I love how the doggie is going rock collecting. Extremely sweet on all fronts <3”

You can watch the awesome and rare footage for yourself below!