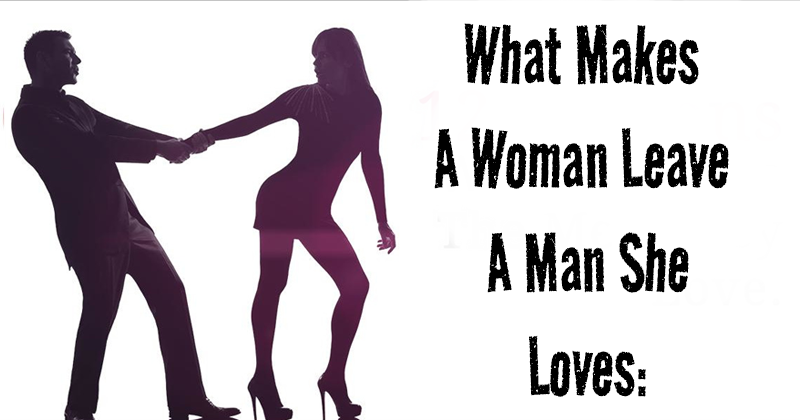 What Makes A Woman Leave A Man She Loves: All Men Should Know This

Men may think that if their wife or girlfriend loves them, that means she will never leave them. However, that is not the case. Often, women fall in love with men for the wrong reasons. Then, their self-respect improves and they realize where they have gone wrong. Below are 12 of the signs that a woman may eventually leave a man she loves.

There’s a saying that opposites attract, but usually for a relationship to remain strong, there need to at least be some common interests. In some cases, a relationship may have started because of common interests, but the two people grew in a different direction. In other cases, the man may change. For example, one woman left her partner when he began to criticize everything about her instead of loving those things about her as he once did.

Women want to be listened to. When men cannot be there physically, they need to stay in contact. They also need to be mentally tuned in to what their partner is saying. They should participate in conversation in a genuine give and take of ideas.

It’s a myth that women don’t need sex just as much as men do. If a man does not seem to want to have sex with his girlfriend, she will begin to feel unwanted. People who are in love want to engage in physical intimacy, and while lust doesn’t last forever, that doesn’t mean that the desire for intimacy goes away.

4. Too Much Selfishness and Secretive

This point needs no elaboration. A healthy relationship is all about being honest with your partner and loving them unconditionally. Despite having a sea of emotions for her man, a woman will break free from the relationship if her partner is mean with her, and starts keeping secrets from her. No matter how small it might be, when a partner keeps things to himself, any one is bound to get hurt. Remember, to be partners in crime you need to know what crimes your partner is committing!

Insecurity in a man is not an attractive quality. Men who snoop and grill their girlfriends will eventually turn them off. Trust accompanies love, and if a man truly loves a woman, he will trust her.

Lying to someone is no way to maintain a relationship. Worse, one lie leads to others because it’s necessary to shore up the big lie with smaller lies. It’s better to just be honest even when it is difficult.

Everybody needs some alone time and some time with friends. Women break up with men who don’t give them any space. Giving a woman the space she needs is a sign of trust and respect, and it’s necessary for her mental health and the health of the relationship.

Some men think they treat the women in their lives right because they spend time with them or even take them to nice dinners. But if the men are closed off emotionally during these times, women get tired of it. Men need to allow themselves to be open and vulnerable or they will eventually be too distant to repair the relationship.

9. Wanting Her to Be Different

Some men fall in love with a woman and have the goal of changing her to make her just right. They aren’t in love at all, they are just in love with the idea they’ve created in their heads. A woman deserves to be loved and accepted for who she is.

10. Not spending quality time together

This is one of the most common reasons why women leave their partners despite having intense feelings for them. A relationship starts dying slowly when there is lack of communication between the partners. Every woman needs a shoulder to lean on after a hectic day, and someone to simply ask, “How was your day?”. Is it too much to ask for?

One of the worst things a man can do is compare his wife or girlfriend unfavorably to another woman, especially an ex-girlfriend. People shouldn’t be compared in the first place. Everyone is unique, and everyone has their own strengths. Complaining that a woman is not like another woman in some way shows her that she is not loved for who she is.

It’s the little things that matter more than the big things, and women expect to be shown appreciation for those things.

Appreciating her from time to time does no harm to anyone, right? A woman happily manages all the house hold chores, juggles kitchen and office work and never hesitates to embrace her partner with a warm smile when they meet after a hectic day. But if she isn’t appreciated for all the efforts she puts in to make the relationship worthwhile, it is bound to eventually bog her down, and it would not be a surprise if she toys with the idea of breaking free from the relationship