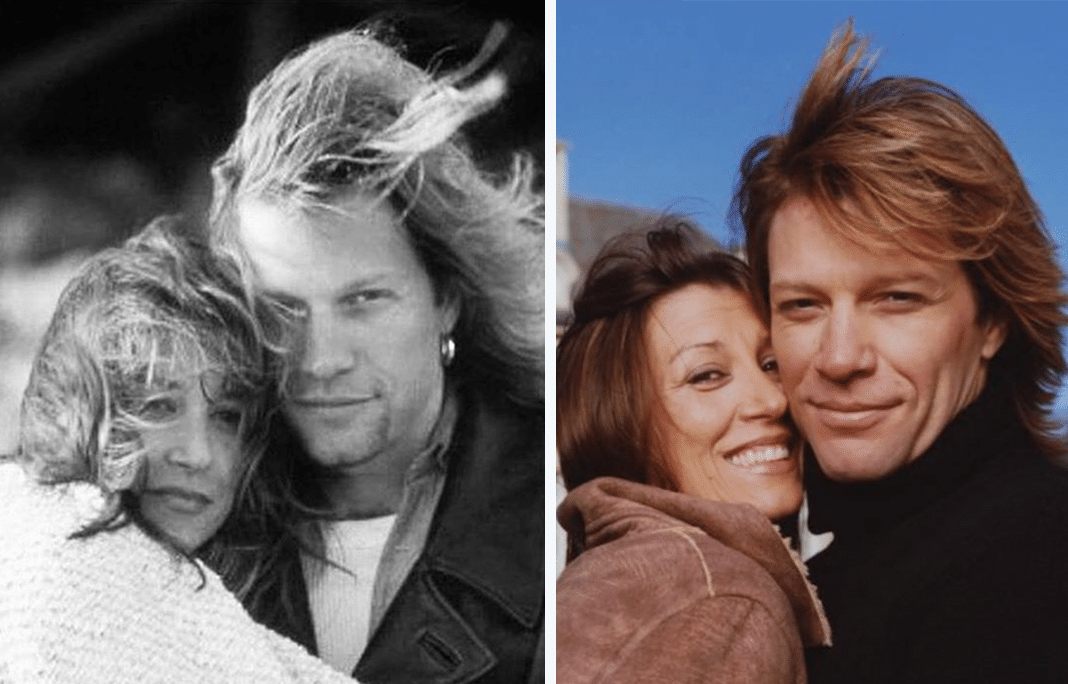 Jon Bon Jovi and his wife Dorothea Hurley beat the odds, celebrating 30 years of marriage in 2019. The iconic musician has fronted the New Jersey rock band Bon Jovi for 36 years and is still going strong. And to think, when he eloped with his Rumson High School sweetheart Dorothea in 1989, he was warned it would ruin his career.

When the band skyrocketed to success and fame in the 80s, the constant touring led to a breakup with Dorothea.

“I ran away and joined the circus. I went on the road,” Bon Jovi recalled. “So, she wasn’t very excited about that prospect and said, ‘Why should I sit here and wait?’”

The singer moved on to other relationships, but his heart longed for his hometown sweetheart.

“All I really wanted to do was to get back home,” said Bon Jovi.

Then, during the 1989 tour for the band’s “New Jersey” album, the singer took a secret Las Vegas trip to elope with Dorothea on April 29 at the Graceland Wedding Chapel. In homage to the late king of rock ‘n’ roll, Elvis, the couple had a late-night ceremony. Jon Bongiovi was 27, and Dorothea was 26 at the time.

Happy birthday to you Dorothea!! Hope you had a great day!!

News that the rocker was “taken” caused “mass hysteria” among his fans and Dorothea became “public enemy number one,” according to Express.

“When I came back from Vegas my manager was furious. He was like, ‘America’s boy is now married? That’s not a good career move.’” said Bon Jovi.

Even worse, the singer’s mom wasn’t keen on the idea either.

“It didn’t fare well with my mother, either,” he adds. “She was not impressed!”

Regardless of the external pressures, having Dorothea in his life was exactly what the singer needed at a time of constant touring, fame, and success.

“Dorothea and I felt good about it, despite it being world news,” Jon says.

“She is the rock of my family, my career, my being. I’m grateful for someone in my life like that whom I can love and trust.”

Despite the initial “fallout,” the couple remains inseparable and more in love than ever 30 years later. Both are age 57 and celebrated their Pearl Anniversary on April 29, 2019.

Meanwhile, the band continues to rock, just wrapping up a world tour called This House Is Not For Sale Tour!

Part of the enduring couple’s recipe for success is making helping others part of their daily lives. Most recently, Jon Bon Jovi expanded Joseph’s House homeless shelter in Camden through the JBJ Soul Foundation.

Even though he’s a megastar, Jon Bon Jovi is down to earth enough to pull weeds on the farm.

In an interview with CBS This Morning co-host Gayle King, we got a glimpse of what drives the couple to take on charitable work. Rather than waking up one morning and saying, ‘let’s do good,’ the couple says helping others has always been a prime motivation.

“I think it comes from a sense of gratitude. We are so grateful for what we have,” said Dorothea. “So, I think it’s natural to want to help people.”

“It also, it motivates us in the morning to wake up and think that we can think bigger,” said Jon Bon Jovi.

Diners can either make a donation or volunteer. One hour of work cooking, washing dishes, busing tables, or waitressing earns anyone a three-course meal.

Below, Jon Bon Jovi and Dorothea Hurley talk about their efforts with the Soul Kitchen farm and philanthropy.

What an amazing couple doing amazing things for their community! And, what a beautiful love story about two high-school sweethearts whose love endured the test of time.

The post After three decades, Jon Bon Jovi’s marriage to his high-school sweetheart is stronger than ever appeared first on So Share This!.