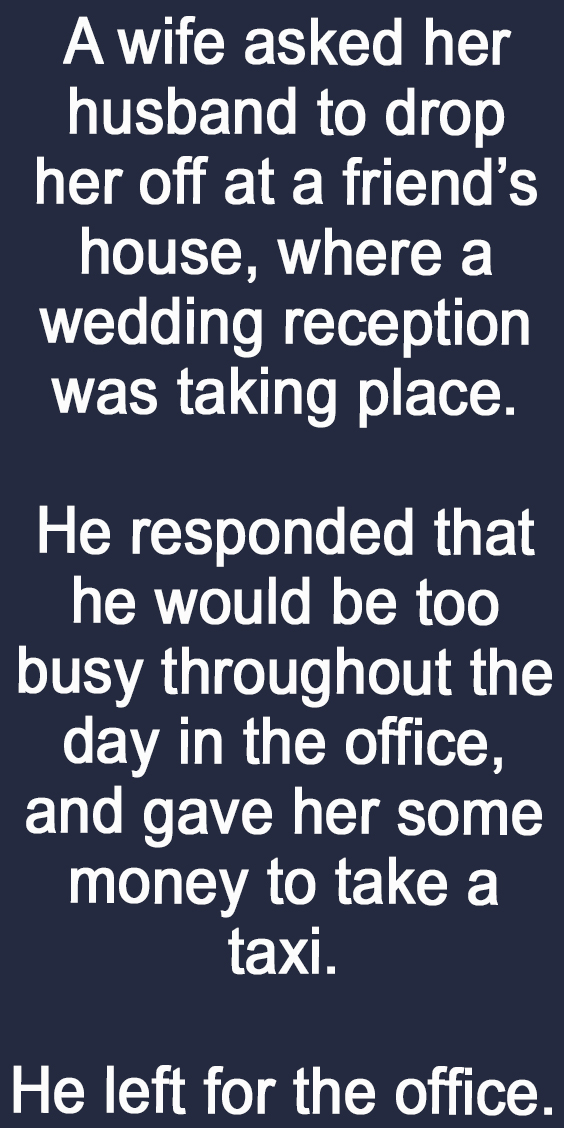 A Wife Asked Her Husband To Drop Her Off At A Friend’s House. –

A wife asked her husband to drop her off at a friend’s house, where a wedding reception was taking place.

He responded that he would be too busy throughout the day in the office, and gave her some money to take a taxi.

He left for the office.

The wife took a Taxi to the wedding reception, there she met a fine Girl and they got talking to each other.

In the evening when everyone was leaving, the Girl asked the Woman how she was going home.

She replied that her husband was too busy in the office to pick her up so she would use a taxi.

“My boyfriend brought me here and would be coming to pick me up. I just spoke to him on the phone and he’s on his way. Why don’t you join me in his car and we would drop you at your house”

The Girl jumped into the front passenger seat of the car and asked the Woman to sit at the backseat, which she did confused and perturbed.

Then the Girl introduced her new friend to her boyfriend.

When the man turned around to greet the woman, he recognized her as his wife. Nothing much was said along the way.

He dropped the wife at home first as planned and proceeded to drop the Girl at her house.

The question now is:

If you were the wife, what would you do when your husband returns home?

If you were the husband, what would you say to your wife when you return home?

What would you do if you are the wife?