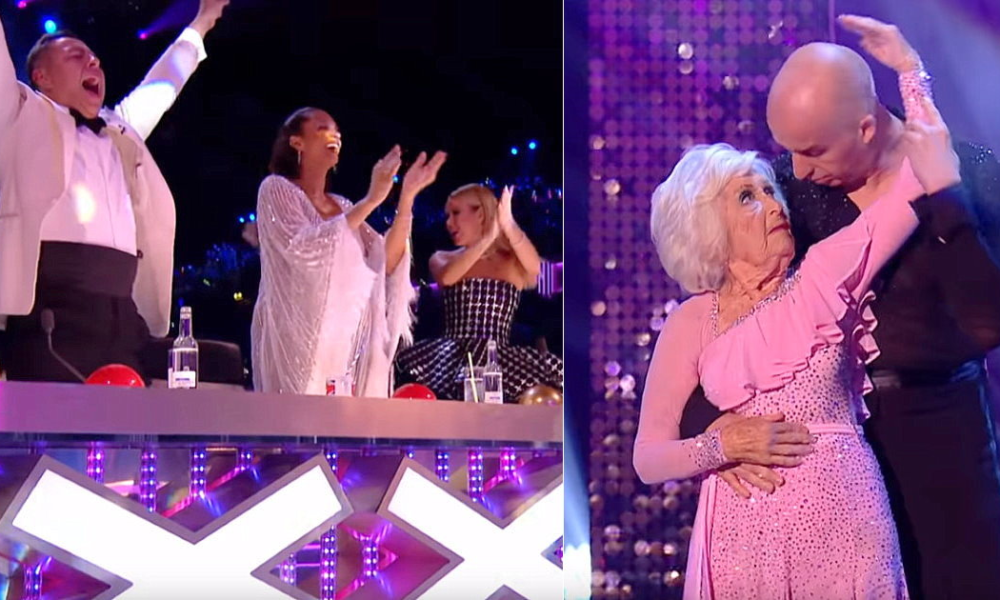 “Nobody puts Paddy in the corner.”

On an episode of Britain’s Got Talent: The Champions, those six words are what kicked off another extraordinary performance from salsa duo, Paddy and Nicko.

And yes, they took on the iconic Dirty Dancing routine right in front of everyone’s eyes!

Get ready to watch the pair transform into a version of Johnny and Baby like you’ve never seen before.

In fact, they even put their own spin on “the lift” that had judges going nuts.

Paddy and Nicko have had BGT fans on the edge of their seats since we first met them in 2014.

If you might remember though, the judges were quite skeptical in the beginning.

That’s because Paddy was 79-years-old at the time, and her dance partner was 40 years younger.

But despite seeming like an odd couple, they quickly blew everyone away with their jaw-dropping dance routine that proved “don’t judge a book by its cover.”

They even had Amanda Holden slamming down on The Golden Buzzer in response.

Paddy initially met Nicko (formally known as “Nico”) when she began taking salsa classes from him over in Spain.

Since then, they’ve lit up many stages with their riveting act.

Much to the world’s delight, the pair returned to BGT again in 2019 – but this time on The Champions version of the show. By no surprise, they did not disappoint.

Paddy and Nicko’s performance was just as power-packed as ever. The only difference was their ages, with Paddy now being 85-years-old, but still able to whip around like a teenager!

They won a Golden Buzzer for this audition as well, sending them straight to the finals.

Their performance was about to get “Dirty.”

Recently on BGT: The Champions, Paddy and Nicko took on the 80s classic that had us all busting a move in our living rooms.

While the internet is full of Dirty Dancing routines that make us cheer, it’s safe to say there isn’t one quite like this.

It all started with elderly Paddy sitting at a table drinking tea (she was in ‘the corner’ of course). But Nicko wasn’t about to let her daddy spoil the fun.

Once the song, “(I’ve Had) The Time of My Life” begins playing it sends the auditorium into a frenzy. Yep, they all knew what was coming!

The duo copies all of the moves that we’ve grown to love. However, what kind of performance from Paddy and Nicko would it be without some huge wow factors?

Nicko whips his partner through his legs like she’s a rag doll, making everyone go wild. But it was just the beginning…

Everyone was having “the time of their lives.”

As the performance goes on, one of the best parts is seeing the priceless looks on all of the judges’ faces.

They wouldn’t be able to pick their jaws up from the floor even if you paid them!

Paddy and Nicko show off their incredible dance skills, which includes some over-the-top moves.

Yet, let’s face it, everyone was on pins and needles to see if they could do “the lift.”

It’s the perfect lift move done in a “safe” style.

Nicko gets down on the ground and lays on his back. Then, Paddy approaches and he lifts her up like an airplane!

He looks just like a daddy giving his toddler a ride – and it’s the best sight ever!

This epic Dirty Dancing performance is sure to leave the biggest smile on your face. Bravo Paddy and Nicko!