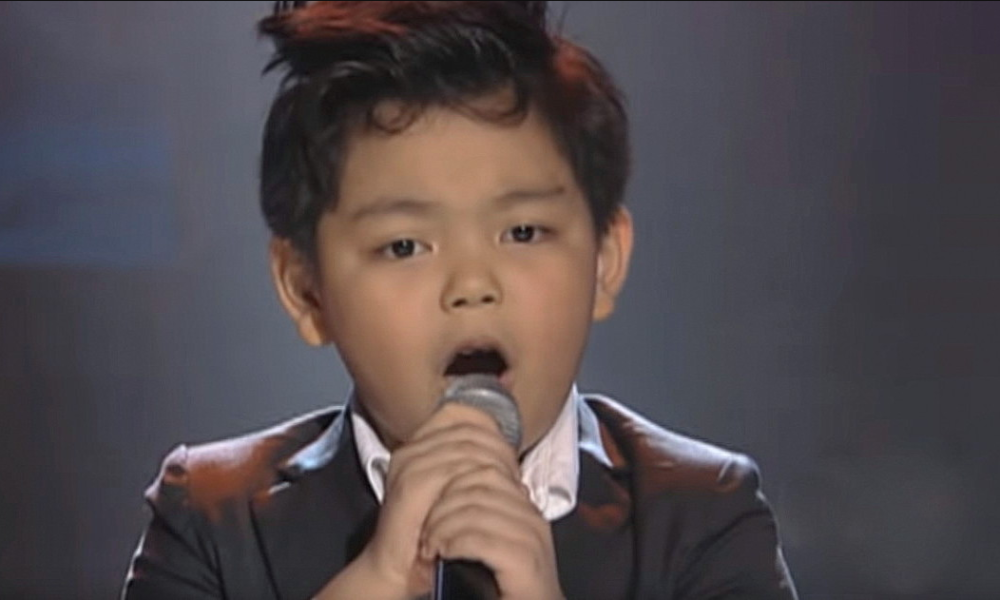 Judges on The Voice Kids know when there’s true talent right behind their backs.

Sometimes, they can pick up on it so quickly that it leads to unforgettable responses.

During an episode of the show in the Philippines – a boy named Nathan Bautista caused the entire panel to scramble for their buttons just moments after he began singing.

In fact, his rendition of “Don’t Stop Believin’” took the world by storm, and currently has been watched more than 17 million times!

Nathan was only eight-years-old when he first stepped onto the stage for his blind audition.

However, his passion for singing actually started developing at a much younger age than that.

As a baby, Nathan learned the words of the gospel from the songs they’d play at church.

His father was also a musician, who helped instill a love for classic rock into his son.

“Since the day he learned his first song, music has filled his heart and home.”

There are youngsters across the globe who dream of appearing on reality shows like The Voice Kids.

After all, it gives “average joes” a chance to be heard by famous coaches – when the opportunity may have never presented itself otherwise.

Nathan, who aspired to be a rocker himself, was ready to show people that he was meant for the spotlight.

In the video below, everyone immediately perks up as the instrumentals to “Don’t Stop Believin’” fill the room.

But the big question was – could the contestant actually handle Journey’s mega-hit?

The judges couldn’t help but freak out hearing Nathan’s voice.

Imus resident Nathan is a vocalist with an undeniable gift.

All it took was him singing the classic line, “Just a small town girl…” for all three of the judges to slam down on their red buttons.

That’s right, only five words from Nathan helped seal his fate that he’d be moving on to the next round.

In no time it became a mini rock concert and the school-aged contestant was the star.

Nathan demonstrated that he had a powerful voice that paired very well with the ’80s track.

Not only that, he delivered the song like he’d been singing it in his sleep.

“Don’t Stop Believin’” is a power-ballad that’s been hyping up crowds for decades.

Although it was well-liked by audiences the first time around, it actually gained additional popularity in 2007 after it was incorporated into the final scene of The Sopranos.

The panel of judges could barely sit still in their seats during Nathan’s performance.

They danced along and cheered as if they were listening to Steve Perry himself.

In the end, singer Lea Salonga was so blown away that she jumped up from her seat to give Nathan a big hug.

It’s not every day that an audition causes such a huge reaction from the coaches.

People shared their amazement about it on YouTube and have continued to do so over the years.

“This is still the most epic blind audition in the voice kids Philippines! After all these years, I still go back watching this video. :)”

“This little boy is so cute! He’s so adorable and is singing one of my personal favouite songs! He makes my day brighter!”

Press play below to see Nathan make jaws drop with his performance!