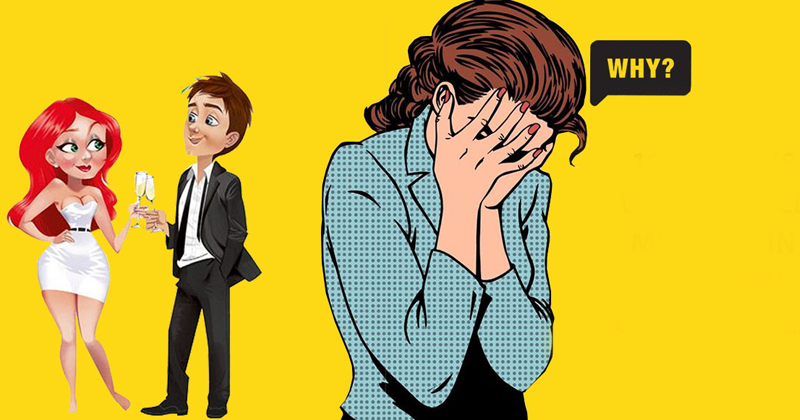 8 reasons why women fall in love with married men

1. With married men, there are no commitments

When a woman has an affair with a married man, sometimes there is no expectation of a serious relationship.

Women, especially those living in the metros, may not want a relationship, following bad past experiences in their love life. Therefore, they do not expect a stable, conventional relationship.

Thus, by being with a married man, she may enjoy a type of no-strings-attached relationship that may not turn into anything serious.

2. Married people have proven that they can commit

If a man is already married, it is solid proof that he is not a commitment phobe and can actually keep his promises.

He has proven that he is stable and reliable – he is likely to stick around when things get tough.

These are extremely attractive qualities for women who have been let down by flaky men who can’t even be counted on to be there for them, let alone support them in a crisis.

3. If you know him well, you will see firsthand how devoted he is

If you’re a close friend of the couple, you’ve seen this man in action.

If he’s a nice guy, that means helping her with the dishes, putting baby food in her child’s mouth, taking care of her when she’s sick, doing chores.

You have heard about her how supportive he has been and how great he is at everything.

If your husband feels you have a crush on him, he has the best behavior while you are there – not for dubious reasons but simply because it is flattering to be admired.

If he has children, it’s even more attractive: you have proof that he would be a great father.

4. Attention from married men is flattering

Women love the attention of married men, especially since he seems to be risking his marriage. This can be a tremendous ego boost for some women.

When a single man compliments a woman, she may misinterpret it as his tactic to get her into bed. But with married men, she is surprisingly more confident since she believes they have no ulterior motive other than wanting to genuinely appreciate her. Get it? Because he’s married.

5. Married men seem to have more control over their lives

Married men are often more settled in their lives. Since they are married, they may have stable jobs, own a home, and are more financially stable than their single counterparts.

Women may be responding to a deep evolutionary need by being attracted to men who can support them.Married men are mostly settled in life.

Thus, the idea of him risking his social status to be with her may be irresistible to a woman.

6. Women buy into his lies

Almost all women who have had affairs with married men will tell you the same story: He was unhappy in his marriage; his wife doesn’t understand him; they stopped having sex a long time ago; he was never in love with his wife; his wife tortured him; I am the only one who understands him.

These are some of the most common excuses men use to lure women into having affairs with them. A married man may lie when he knows that his wife has begun to idolize him. He tries to generate sympathy in her mind and uses pain to create a connection. These excuses also help him to justify his affair with the new woman.

If the woman has seen her parents’ marriage fail, she may no longer trust the institution of marriage itself. Women coming from broken homes do not see marriage as something sacrosanct that cannot be toyed with. Therefore, there is no guilt factor that prevents them from pursuing an affair with an attached or committed man.

“Father problems” are a set of psychological problems arising from the absence of a father figure in a girl’s life. These childhood problems can manifest themselves later in life when a woman starts dating. Women who tend to be rejected by their father figures may seek out men who may have similar attitudes toward them in relationships.

Most people don’t practice male poaching for even better reasons.

You love your friend and value the friendship: why would you consider doing something that would devastate her?

Honestly, trust, respect – these are all at the top of most people’s wish list in a partner and all are immediately pushed aside when you/they are unfaithful.

3. You have too much confidence to settle for someone else’s leftovers

A 2007 study found women who were confident that men found them attractive and who had had more sexual partners were less likely to like attached men, let alone act on the attraction.

Why choose all the destruction and drama of stealing someone else’s man, when you are perfectly capable of attracting a desirable available person?

Most relationships that start from an affair don’t last – and not just because of the jealousy factor of knowing you’re both capable of cheating.

Few people live up to our fantasies of what we think they will be like – especially if you live with someone 24/7 – with most ending up disappointed.

In short: be careful what you wish for.

Advice to women who fall in love with married men?

I would say that happiness is ultimately important. But it’s also important to see facts as facts. When you are in love with the married man, you can see the world through rose colored glasses.

A very small percentage of married men may want to leave their wives, regardless of what he tells you about his equation with his wife. Many women accept their “mistress” status, suffering silently alone while men vacation with their family and never acknowledge their relationship in public.

It is important to assess whether there is a future with the married man. There is always a chance that the man will repeat his behavior with other women. Perhaps there is a pattern. If you are not gaining anything in the relationship, you should reconsider it.