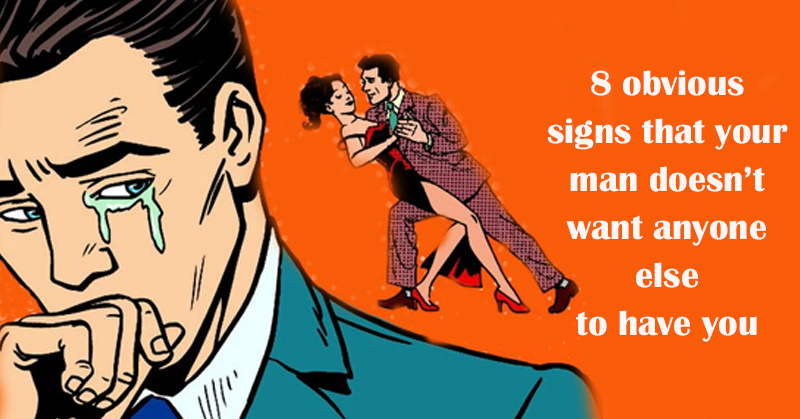 Often, it can be hard to get a man to open up about his feelings. If you start to ask him how he feels about you, he might not give you a direct answer. Relax. Don’t worry. Sometimes men speak more clearly with their actions than their words. Your partner might not tell you that he can not imagine his life without you, but he will certainly show you that he does not want anyone else to have you. Here are 8 obvious signs that your man wants you all to himself.

Actions speak louder than words at the end of the day. He doesn’t say he wants you, he shows you through actions instead. He might not be getting down on one knee and asking you to be his girlfriend, but he shows his affection in a different way. He showers you with texts, gifts, affection, or maybe even time. If you’re honest with yourself, sometimes this even feels like it’s too much, like he’s love bombing you. Sometimes guys resort to being overly sweet thinking that’s what’s going to win women over. Maybe he treats you like a queen because he’s afraid you’ll turn your head and be whisked away by some other prince charming.

2. He Remembers All The Little Details

What better way to stand out than by making you feel like he truly understands you? It’s not always easy to demonstrate to others how engaged we are in the things they say. One way he might be proving this is by repeating back things you’ve mentioned in the past, whether it’s an offhand comment you made or a poignant childhood memory. In his own little way, remembering the little details is his way of saying “your words have value to me”.

3. He Gets Bothered When You Go Out With Someone Else

So you went out on a date with another man. You did nothing wrong — you’re single and available, no matter how much of a crush “he” might have on you. And he knows he can’t say anything negative about it because he’s not technically your boyfriend (even though he acts like it half the time). But that doesn’t mean he won’t be bothered about it. You’ll feel him seething quietly when you’re around him, itching to give you a piece of his mind even though he has absolutely no right to do it. He’ll try to learn everything he can about the other guy, even asking your friends about him, but at the end of the day, he knows that if he wants you to stop dating other people, he has to make a serious move on you for himself.

4. He’s Always the First To Come To Your Aid

There’s no better way to convince a person that you’re their soulmate than always being the first one to come to their aid when they ask for it. He knows that since you’re single (and amazing), then you’ll probably have a ton of guys waiting to lend you a hand whenever you need some help, and he can’t let that happen. So that means he always has to be first. If he’s always rushing to help you out, it’s clearly because he doesn’t want anyone else to gain your approval and attention.

Ever heard the saying “leave them wanting more?” All these great s.e.x moves might just be a ploy to get you to stick around longer. He doesn’t want you to forget him the minute you leave the bedroom so he gives you a lot to remember. After all, how could you even begin to think about someone else when you’re still recovering from a particularly steamy session? He might not be outwardly possessive but this could be one of the ways he shows you exactly where you belong: with him.

6. He’s Emotionally Vulnerable With You

It can be notoriously difficult to get some men to open up. Telling you straight up that he likes you isn’t the only way men express themselves romantically. Maybe he’s still unsure about how he feels; maybe he wants to keep his feelings under wraps a bit longer. Regardless of how he feels, his affection is bound to spill in other areas. For example, you might notice that he opens up to you a bit more than he does to other people. He talks about his anxieties as well as his passions. You see a depth to him that most people don’t see. For all you know, this could be his way of pulling you in closer.

He acts like a boyfriend, talks like a boyfriend, and feels like a boyfriend — but for the life of you, you can’t understand why he won’t make the moves to take the relationship to the next level. It’s like he likes you but doesn’t really like you, but he also acts like no one else is allowed to ask you out. So what’s going on? It’s possible that he’s been hurt in the past by previous girlfriends in his life. He might have gone through something extremely traumatizing and emotionally stressful, and now he has trouble committing to a serious relationship even though he really wants it. Walk him through these memories and help him face them again. If you truly feel that he would make a great partner, then help him realize you want him to be that man for you.

Do you ever get the feeling that he’s trying to fill up your calendar with nothing but him? Every time you get a day off from work or a free night or weekend, he hits you up and asks if you’re free. Free to go out for dinner, free to watch a movie, free to go hiking or bowling, or a million other things. His insistence on being with you is cute, but the fact that he doesn’t treat it like a real date is questionable. It’s best to try to help draw out his real feelings when he’s obviously making plan after plan with you; maybe he doesn’t even know what he really feels.