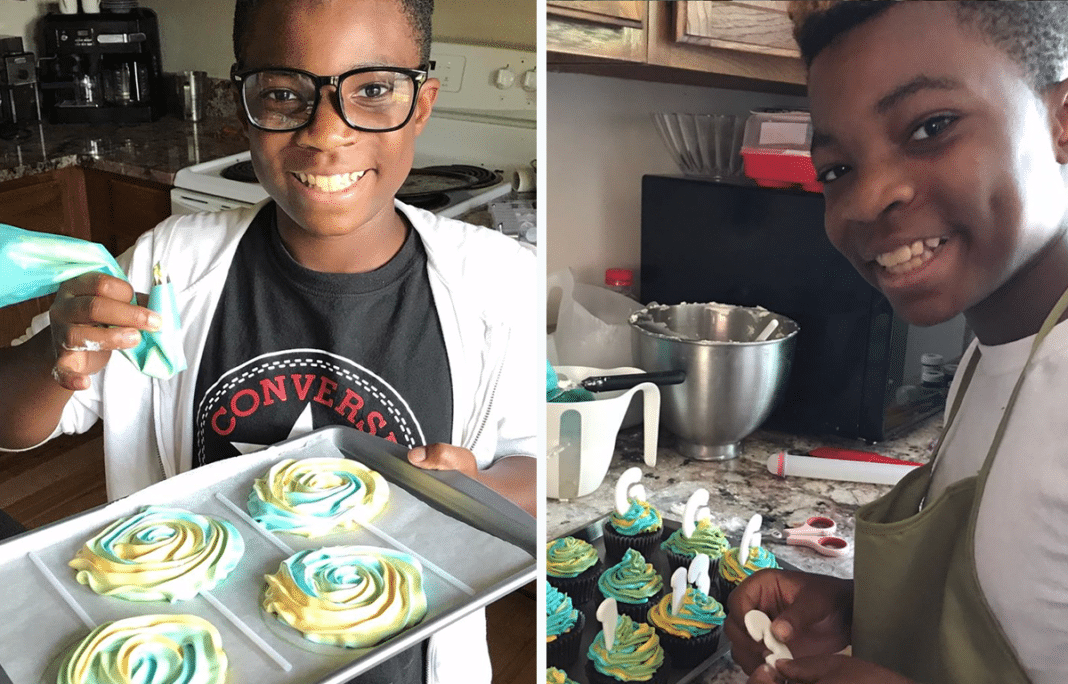 At just 13-years old, Michael Platt has achieved what many of us can only dream of as adults. He’s taken on a new career path, one that has started taking off with national recognition. But more than that, his efforts are helping the homeless and kids facing tough times. Rather than focus on his own troubles, he founded a bakery called Michaels Desserts. He left out the apostrophe because he’s baking for others, not himself.

Michael started baking with his grandmother at nine years old.

“It was a while back. I was nine years old, and my grandmother let me bake cake for a family dinner,” said Michael.

Michael’s Almond Joy cake was his first taste, and after that, he was hooked.

“I just fell in love with baking,” he said.

Then Michael was diagnosed with epilepsy in the 5th grade and started having seizures. His favorite activities before the diagnosis were swimming, climbing trees, and gymnastics. Afterward, he was forced to restrict his activities, but baking was one exception.

“It opened up a bunch of time for me to bake because there are no restrictions on baking. I just found my true passion for baking,” Michael said.

Aside from his love of cupcakes, Michael also loved the example of fighting for social justice set by the Rev. Martin Luther King Jr. Then a Christmas gift from his grandparents suddenly gave him a brilliant idea for how to combine his two passions.

He received a pair of Toms shoes for Christmas. The company matches every pair of shoes purchased with a pair of new shoes for a child in need. Suddenly, Michael knew exactly what to do.

With help from his “baking consultant” mother Danita and his family, Michael started a bakery with the mission to donate to the homeless, hungry, and to children of domestic violence. Now the business pays for itself with orders from Facebook and a new website.

His most popular items are cupcakes and cakes for local birthdays near Bowie, Maryland. Other items include his signature monthly “freedom fighter cupcakes” that he bases on real role models who have inspired him. He shares their story on Instagram. Past examples have been custom desserts inspired by freedom fighters Maya Angelou, Nelson Mandela, and of course, MLK, who gets two dedicated months.

In July, he dedicated his treat to Pakistani activist Malala Yousafzai.

“My July Freedom Fighter is a courageous advocate, and this cupcake is to honor her!”

See him discuss Malala and his dedicated treat below:

My July Freedom Fighter is a courageous advocate and this cupcake is to honor her!

Twice a month, Michael travels in-person to domestic violence shelters, transitional housing, and other locations to hand out his creations.

“We go to domestic violence shelters. We give them a cupcake because it’s a kid and that’s part of a kid’s childhood. So they should get a cupcake, and that’s what I do,” he explained.

Michael’s advice for others is “not letting bad times stop you from doing what you love.”

We could learn a lot from his example and finding our own true purpose in life.

“I always wanted to have a purpose for what I do,” he said. “It’s all about helping people — not just having a purpose for yourself, but thinking about, ‘How does this touch other things?’”

See Michael and his mother Danita in an interview for Access below:

See another interview with Michael Platt from Strahan and Sara below. Michael meets his hero, celebrity pastry chef, and chocolatier Jacques Torres.

The post 13-year-old opens a bakery. For every cupcake he sells, he gives one to the homeless appeared first on So Share This!.