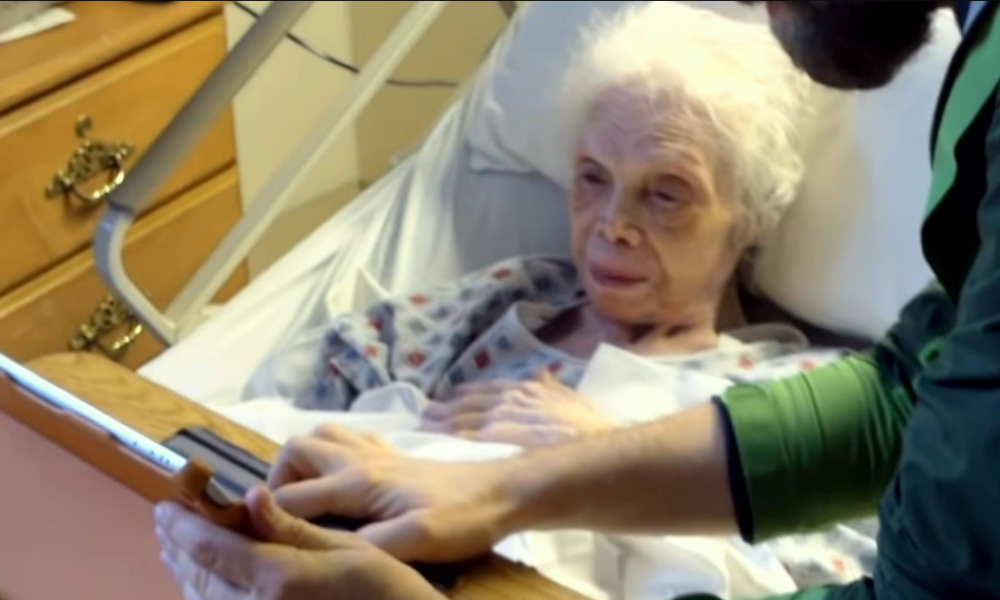 Nowadays, everyone is walking around with video cameras. Chances are, you probably don’t even remember the first time you saw yourself on film.

For this 102-year-old dancer, that’s exactly what happened when someone brought footage of her dancing to the hospital.

She danced during the Harlem Rennaisance, but had never actually seen herself dance.

For Alice Baker, her time as a dancer was long ago, a distant memory of the past.

She never imagined she would be watching herself on a screen all these years later, it was like she was actually there again.

They spelled her name wrong as “Baker” instead of “Barker, something Alice said they frequently did back then.

You can see Alice’s eyes light up when she first the footage, she’s so happy.

The first video they watch is called the ‘Sepia Steppers’ from 1943, you can see Alice to the right.

The dances were performed in live clubs, they were choreographed and complex routines.

Alice and the other dancers, mimic each other step for step in beautiful outfits.

Alice tries to hide the smile that you can see is illuminating her face, she even tells us how and why she got a special nickname from the other dancers.

Alice was given a nickname back then by the other dancers,”Chicken Little.”

Most of us hear “Chicken Little” and think of the popular kid’s movie, but Alice is the original “Chicken Little!” the nickname was given to her by the other dancers, simply because she loved chicken.

“Because every time we’d go somewhere they’d say ‘what you want to eat?’ And I’d say ‘Chicken,’ so they called me chicken little,” explained Alice.

They even found footage of Alice dancing with superstar, Bill “Bojangles” Robinson

There’s loads of footage they have to show the 102-year-old, from full-scale dance routines to just looking pretty for the camera and showing off a little leg.

One of the videos is of legendary Bill “Bojangles” Robinson performing, you can see Alice in the back round.

At one point, Robinson called the group of dancers over and there Alice is, right in the front.

Watching herself on film for the first time, made the 102-year-old’s heart sing with joy

At the end of the video, Alice tells us how she feels about seeing the footage, she explains how it felt to be paid to do something you love.

“It’s just fabulous to see those and remember all these things that were happening. I used to often say to myself, I’m being paid to do something that I enjoy doing and I would do it for free. Because it just felt so good doing it, because that music you know, I get carried away in it,” said Alice.

What an amazing video capturing Alice’s reaction seeing herself for the first time so long ago.